Start a Wiki
Forums: Index → Community discussions → How are we going to deal with the new TS4 redesign? |

Post
So if you have heard the recent news, The Sims 4 is going to get a brand new redesign next week, which will affect its logos, icons, cover arts, plumbob, loading screens and main menu. This is obviously a big change, especially since the whole wiki is based around the old, now seemingly abandoned, design of The Sims 4.

Here are some examples of this new design: 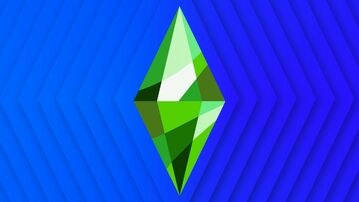 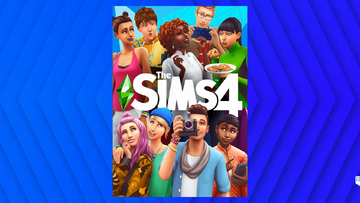 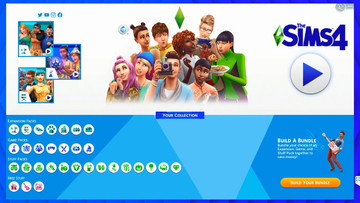 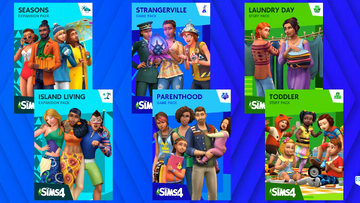 And since the wiki is neutral, we cannot just "ignore" this change and continue with our current ideas, despite what we personally think of this new theme they are going for. (I personally think it's ugly as heck) So we obviously are going to update all of our TS4 cover arts, icons, logos...... Wait a second. Yeah. While the cover arts and icons are easy to update by just re-uploading them, the logos are a problem. Because it seems that the game no longer has logos like these: 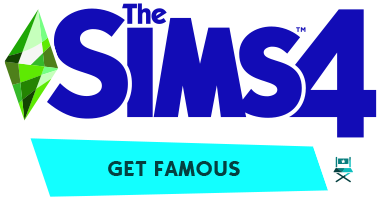 If you look at the box arts of the new content packs, they no longer have unique logos, which are necessary for our infoboxes. And the new logo for The Sims 4 is pure white! How are we going to include it in, for example, {{Sims}} when it just blends in with our white background? And so are the new icons fully white too. But I think the icons at least can be handled by adding custom shadows behind them to make it easier to have the round shape be visible, if the official ones won't have a shadow.

Oh, and there's also our actual wiki theme. When these new designs go live our logo no longer represents the newest form of Sims. And I guess blue is now even more important and that green is becoming obsolete? I don't know. Should we care about for the wiki's general theme? Should we make the background from green to blue? Or should the logo become fully blue like in the new main menu? Or should we not do that since the majority absolutely hates these new themes and just update the box arts and logos? - SimDestroyer (talk) 17:01, July 13, 2019 (UTC)

In my opinion, the logos are too small to read on infoboxes anyway. They just look like the game's main logo with a colored stripe underneath it. We could put the main logo there regardless of pack, and it wouldn't make much of a difference, I think.

For icons, perhaps we could use the versions on the new main menu, where they're colored icons on a white background.

Finally, for the wiki's theme, we could make small changes so that it resemble the game's new design, such as making the background we already have blue, and changing the logo to a dark blue version with the new Plumbob. The "Wiki" part would then be colored in the new Plumbob's shades of green to differentiate it. Here's a quick, messy mockup I made to show what I mean: [1] ✨AireDaleDogz✨ (talk) 19:30, July 13, 2019 (UTC)

(edit conflict) Updating the logos, box art, etc is simple enough, as you point out. In instances where the "official" logo clashes with our current theme (e.g. white logo on a white background), we can always keep the older logos until we figure out a good way of implementing them.

But in terms of its affect on the wiki theme, I'd say don't sweat it. Even now, our wiki theme doesn't 100% adhere to the in-game theme. Blues and greens seem to permeate the entire Sims series, not just TS4, so there's no harm in continuing to sport those colors on the wiki. It's much more important that the wiki have a cohesive style throughout; it's not as important that the wiki theme matches the current-series game. -- LostInRiverview talk · blog · contribs 19:33, July 13, 2019 (UTC)

Yeah, I've always thought the wiki resembled The Sims 3 the most in actual terms of design. As long as it does its best to represent The Sims Series as a whole in theme, I think we'll be okay. Ѧüя◎ґ (talk) 21:40, July 13, 2019 (UTC)

Well, well. I was right. The content packs do get brand new logos, but "The Sims 4" in them are fully white. And I tested how this works in our current infobox design with the white base game logo and it looks terrible. Which will be the same for the content pack ones as well. 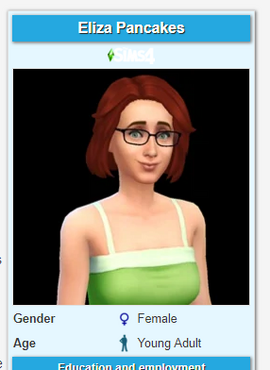 There are a few options.

So, since this wiki goes for community discussions, what option would you all pick? Or do you have any new ideas? Oh, and I think we should stop/revert any logo and icon updates before we sort this out. - SimDestroyer (talk) 16:05, July 16, 2019 (UTC)

Okay so I did make a custom version of the logo with a black shadow, but it doesn't really look too great either if you take a look at my second sandbox. - SimDestroyer (talk) 16:26, July 16, 2019 (UTC)

The logo isn't just included for aesthetic reasons; it's there so readers know (without having to understand our color scheme) what game a particular Sim belongs to at-a-glance. To that end, I think that the ability of readers to actually see the logo is more important than whether the logo is official. I should add that just because The Sims 4 has a new logo, doesn't mean that the old TS4 logo is no longer official. Redesigning the infoboxes to accommodate the new logos isn't a bad idea, but until or unless that happens, I'd say we just keep what we have and not worry too much about whether we're 100% "official". So as of now, given the options listed above, I'd choose number 1. -- LostInRiverview talk · blog · contribs 21:09, July 16, 2019 (UTC)

But what about upcoming packs such as Moschino Stuff or upcoming expansions with new worlds that will only use these new designs? - SimDestroyer (talk) 21:25, July 16, 2019 (UTC)

I'm a bit confused on that all covers and logos are getting replaced instead of simply shown as a 'new' version (like done with new TS3 cover art)? Is this done conciously? DeSims (talk) 11:17, July 17, 2019 (UTC)

I agree with this confusion. Replacing the logos and covers should not be how we go about adding the new logos to the wiki; they should be uploaded as separate files. Right now, all the infoboxes that show TS4 logos (such as Infobox Sim and Infobox family) now use the new logos, which do not appear correctly. We haven't agreed on literally anything to do with how we implement the new logos, what changes we make to our infobox designs, etc. The replacing of those images is very premature. -- LostInRiverview talk · blog · contribs 18:40, July 20, 2019 (UTC)

The new logos, icons, and box art should not be simply uploaded over the old ones. They should instead be uploaded as a new file. The "Upload a new version" functionality should be used to upload better quality versions of the same image and not to replace the image with a completely new one entirely. The old logos, icons, and box art can still be kept on their respective articles in the galleries, captioned as "Old logo/icon/box art, used until July 2019". There is simply no reason why we must rush to update; we do not fluctuate with the game series, but rather adopt a more Wikipedia-like approach in being open to keeping old information. That's one reason why we still have TS1 content on our pages. —k6ka 🍁 (Talk · Contributions) 02:40, July 21, 2019 (UTC)

I just made a sample Plumbob image at File:The Sims 4 Modern Plumbob Design.png using a JPG image. If anyone is willing to find a PNG image already with transparency to replace the image, I would be grateful. Matthew Cenance (talk) 20:43, July 16, 2019 (UTC)

I realise that nothing has yet been decided on how to formally approach EA's colour scheme change, and judging by the consensus above it isn't really a life or death matter, but I have nonetheless created mockups of the current wiki logo with the new plumbbob design using both the white colour scheme and the dark blue one, akin to what EA are using for some TS4-related media. Up to you if you want to use them, even if it's just for social media stuff. I can provide a Photoshop PSD for this upon request. -- Lost Labyrinth

Retrieved from "https://sims.fandom.com/wiki/Forum:How_are_we_going_to_deal_with_the_new_TS4_redesign%3F?oldid=886550"
Community content is available under CC-BY-SA unless otherwise noted.