The fire station is a community lot assignment introduced in The Sims 3: Ambitions.

Sims in the firefighting profession work at fire stations, which feature a Woo Woo 4000 and fire alarms that must be maintained. These objects decay whenever an active firefighter is not on the lot, and if they decay too much they can fail. When an emergency happens, firefighters leave the station, and return to it once the emergency is dealt with. George Dean of Riverview also lives in a fire station that was converted into a house after it was abandoned due to budget cuts.

Fire station generally feature a fridge, beds, showers, and toilets; with these items, it is possible in theory for a Sim to live in a fire station.

The Fire Department in Twinbrook.

The default fire station lot in Twinbrook is simply called the Fire Department. It features a trampoline, and working kitchen, and various skill objects like the Scraptastic™ Workbench.

The Verona County Fire Department is the default fire station in Appaloosa Plains if The Sims 3: Ambitions is installed. It may have a reference to Veronaville or Verona: a city in Italy. 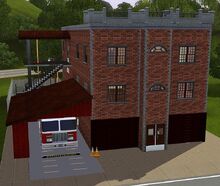 The Community Fire Department from the lot bin.

Retrieved from "https://sims.fandom.com/wiki/Fire_station?oldid=887780"
Community content is available under CC-BY-SA unless otherwise noted.