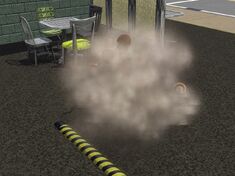 Mortimer Goth and Miraj Alvi fighting in The Sims 3.

Fighting is the most negative social interaction in all games in The Sims series. When two Sims dislike each other enough, they can start a full on fistfight.

When fighting occurs a cartoon-styled cloud of smoke will appear and obscure most of the fighting. Sims with higher body[TS][TS2], athletic[TS3] or fitness[TS4] skill are more likely to win the fight. A police officer and a burglar will fight if the police are summoned during a burglary.[TS2][TS3]

In The Sims, the cloud of smoke will completely obscure the fight. If an adult Sim loses a fight, they may leave the neighborhood forever and cannot be brought back. In the base game, children can also have fights, but they will never leave town if they lose. Their ability to fight was removed in later expansions.

In The Urbz: Sims in the City, Fight can be chosen regardless of relationship.

As the Fight social type did not exist in The Sims and The Urbz: Sims in the City, Attack/Fight was a mean social.

Fights in The Sims 2 and The Sims Stories are a little more graphic and violent. Sims will pop up occasionally through the cloud of smoke, and will use a small variety of professional and comical fighting techniques. A Sim who is a child or older can start and watch fights. Sims with a higher body skill are more likely to win fights.

Beginning with Nightlife, a fight can trigger fury. This can also happen in The Sims Stories. If a Sim catches their children fighting, they will lecture the child. After a fight, the Sims involved get a memory of winning or losing a fight. In The Sims 2 and The Sims Stories, Attack is a Fight social instead of a Mean social. The chances of winning the fight is modified by approximately +5% for each body point the Sim has that the other Sim doesn't, or vice versa.

If Pets is installed, two pets can start a fight with each other if their relationship is low enough. Like normal Sim fights, nearby Sims will watch the fight and react differently depending on their personality. It is, however, likely that the pet will run away if they lose a fight against a wolf.

In The Sims 3, Sims can initiate a fight if they're very angry at each other. A Sim with the mean spirited trait has the "Beat Up" interaction, while a Sim with the proper trait has the "Give (Sim name) What For" interaction, on which the Sim will harass the other Sim before fighting.[TS3:SN] Sims with the proper trait cannot properly initiate fights, or attempt to defend against burglars even if they have the brave trait. Sims with the good trait cannot initiate fights at all, but they can still get involved in them, as well as win.

The outcome of a fight is based on several factors. Some factors cause a Sim to instantly win regardless of any other factors. The outcome is determined by the following, in that order:

The winner will receive the "Winner" moodlet, while the loser will receive "Humiliated" moodlet. A celebrity who engages in a fight may be publicly disgraced.[TS3:LN] SimBots and plumbots will always win against mummies. Bonehilda always wins against anyone.

In The Sims 3: Late Night, Sims can brawl in addition to fight in a bar, club, or lounge (except future lounge)[TS3:ITF]. Brawling has a completely different system from fighting. A Sim can initiate a brawl with another, and more Sims can join (Sims may only autonomously join a brawl in a bar lot assignment). A brawl may last for 15–25 minutes, and additional 7–10 minutes per Sim involved. During a brawl, various debris will fall out of the fight cloud in a comical way.

The brawl score is calculated as following:

If more than 7 Sims are involved in a brawl, police will come to stop and lecture the Sims. There's a 25% chance a Sim will get either "Backache", "Sore", or "Hurt Hand" moodlet after brawling.

In The Sims 4, fights can be started by Sims who have a very negative relationship with someone. They can also be started by any sims if the holiday is "Neighborhood Brawl". [TS4:S] Like in previous games, the fight is obscured by a cloud of smoke. Sims who lose a fight will become dazed, while Sims who win become confident. Sims with the squeamish trait will become uncomfortable after having a fight. Children can also get into a fight with each other.

If a fight is happening near other Sims, they will come to witness it. If a Sim witnesses their friend losing a fight, they become uncomfortable, and become happy if witness them winning. If the two fighters are fighting for the first time, this can be enough to make the two despise each other. Adults who witness children fighting will become angry, and parents can punish them for doing so.[TS4:PH] Pets can also fight if they have a poor relationship; however, there is a chance that the loser runs away.[TS4:C&D] If a child or teen gets into a fight, their conflict resolution character value will decrease.[TS4:PH]

Sims who have a high fitness skill can practice fighting with other Sims. The animations are mostly the same as with normal fighting, but Sims won't get any moodlets from it.

A fight between four Sims in The Sims.