Feng Choo is a pre-made maid who resides in Bridgeport. He is best friends with Ace Wilde. He has 3 skill points in Piano and Cooking. He carries a book in his inventory. He can be made playable by marrying him, or asking him to move in. He is 16 days away from becoming an adult. His female counterpart is Delicia Hoover. 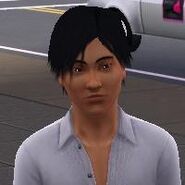 Feng in his service uniform
Add an image to this gallery

Retrieved from "https://sims.fandom.com/wiki/Feng_Choo?oldid=896020"
Community content is available under CC-BY-SA unless otherwise noted.