Farah Moonbiscuit is a pre-created character featured in The Sims 2 for consoles. She resides at Shoreline Trails with Timmy Tool and Torin Namaste. She is the only playable Sim at Shoreline Trails and is the first playable character that isn't your own Sim. At the start of the game, she has three skill points in cooking.

Judging by Farah's name and appearance, she is most likely from Arabian or Indian descent. The "biscuit" part of her surname is a reference to the British English equivalent of the American English noun "cookie", a small, flat cake that is dry and usually sweet. It may be a subtle reference to mooncakes. 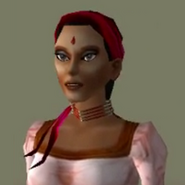 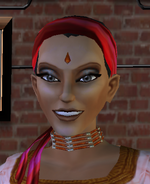 Farah Moonbiscuit Headshot
Add an image to this gallery
Retrieved from "https://sims.fandom.com/wiki/Farah_Moonbiscuit?oldid=909131"
Community content is available under CC-BY-SA unless otherwise noted.