Zurel Pan is the mother of Peter Pan, and former lover of Prince Charming.

Zurel is flirted with by Prince Charming, and eventually they sleep together, resulting in Zurel becoming pregnant. Prince, however, refused to acknowledge Zurel after their night together and moved onto his next woman. Broken and distraught, Zurel later meets Gothel, a mermaid who also had her heart broken by Prince. Together, they manage to assassinate Prince by fooling him into eating mermadic kelp which turns him into a mermaid. However, as he is far from water, Prince rapidly dehydrates and dies.

Some time later, both of Prince's daughters are killed, leaving Prince's widow Ella distraught. Ella's old friend Talia helps Ella come to the conclusion that Zurel and Gothel were behind the demise of Ella's entire family, and she seeks vengeance against them. 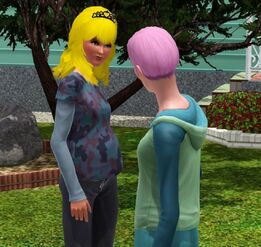 Zurel is confronted by Ella.
Add an image to this gallery

Retrieved from "https://sims.fandom.com/wiki/Fanon:Zurel_Pan?oldid=784002"
Community content is available under CC-BY-SA unless otherwise noted.