Wyatt Garvouis is the 2nd generation heir of the Garvouis family. He is Constance Garvouis and Isaac Garvouis first son.

Wyatt was born in the serene town of Riverview. His father, Isaac, was a revolutionary inventor, who was innovating in technologies, creating many new things, while his mother, Constance was a lonely journalist, still dedicated to her family.

After Wyatt's birth, Constance left her job for some days to take care of him, and when he grew up into a toddler his mother kept caring of him, while his father was focused on inventions, due to that Wyatt was mostly raised by his mother, also helped by Irina Bulls, the butler. He quickly learned how to talk and walk, though potty training was very hard, and this almost cost him a bad grow up, but his mother made an effort and successfully trained him.

After another try, his parents had Alfred, who was given less importance (because they already had an heir) so he slept in another room, not in his parents' room like Wyatt.

Wyatt then started to sleep in a more "child"'s room, which was completely remodelated to make it less "adult".

Wyatt grew up well after a family birthday party organized by his mother and father. His parents demanded him to get good grades in the school, otherwise he would be punished. Wyatt studied a lot to satisfy his parents, since they were celebrities, all family members should keep up the appearances.

Wyatt was mostly focused on studying, though he had an active social life, going to plays in Stadium with his friends, to distract himself from studies. He raised his painting skill and practiced exercise, this was very encouraged by his mother. Even at night he sometimes escaped to TV and there he worked his strength.

Wyatt was not very aware of his father's outside life, he worked a lot and hanged out a lot, but he didn't know where he went, but his hangs out progressively became diminished. Although, he was friends with him, but he preferred his mother, who was his best friend. Her mother sometimes was also invited for parties, when this happened he was left at care of Irina. His mother also got pregnant for the last time.

His father Isaac planned a birthday party for him where many guest were invited, unfortunately for the Garvouis, this was almost ruined by the contractions of birthchild of Constance. After all the panic, Ursula was born, and party was successful due to Isaac's effort, and Isaac grew up into an adult.

After this the family returned to normal life, Constance taught Alfred to walk.

Joyfully for the family, Wyatt got listed and classified as one of the best students in the entire school. And his parents decided to give him a bike as gift for his good work.

During this time, Wyatt developed a close relationship with his teenage classmate, Leopold Crosby, son of Odin and Heather Crosby.

Wyatt grew up into a teen and got a more rebellious temper, he angered his father for choosing clothes completely different from the family style. They argued about it, and Wyatt would have to go Tuesday to the "beauty salon" to re-choose his clothes.

After the argument, a fire started upstairs burning Irina who passed out after being electrocuted. The firefighters didn't come soon enough, and Irina got "eaten" by the fire and was buried in the Garvouis manor. The family felt this lost and all agreed to hire a new butler, Adrian Duncan.

While his father and mother still cared for him and his siblings, they were getting more and more popular, Isaac trained many people at the Gym, and his mother was invited to many parties and celebrations. Wyatt also changed his appearance to please his father, but unfortunately after being at the gym too much time after the curfew he got arrested and polices send him home. His father was irate by this and their relationship declined. His mother was in that night invited by her very close friend, Billy Caspian, she slept there and his father visited Marissa, of course, without anyone knowing about it.

Wyatt also became even more close to Leopold, he was invited to his home and they played together.

On the next day, Alfred grew up well and immediately got interested in his father's inventions and they started to develop a good relationship. One day after it was Ursula's birthday and grew up well, the family realized that she had a good taste, especially when it came to clothing, she was the one who chose what she wanted to wear.

Isaac invented the Time Machine and everyone in the family was glad. Riverview had never been so developped till Isaac moved into it! Isaac was even more poular and got into many new friendhips with celebrities. Things were also going well to Wyatt, he was awarded a laptop by his parents for getting into the honor roll.

Wyatt developped a deeper relationship with Ursula after teaching her to study, while his brother, Alfred mostly collected bugs, and Wyatt once saw him talking to ghosts, which Wyatt found extremely creepy.

The whole family appreciated when Ursula made muffins and they started to sell her meals.

His father became a fulfilled person by mastering 3 skills and Ursula got in the honor roll and finally Wyatt grew up well.

After growing up Wyatt learned he wished to become a professional firefighter so he requested the career at the Fire station, he was immediately employed due to his high athletic skill but he had to improve his handiness, he also met many co-workers there such as Lee Chung and the elderly evil June Shallow but sweet talking.

He started to work out in order to be fit and that made him get 2 promotions. His brother Alfred grew up badly and by the same day he met June Shallow's daughter, MaryKay Shallow and they became friends, their relationship advanced too quickly after they had met at the Old Town Cemetery, place he thought was very creepy for a first date, MaryKay, however, loved it. They went steady together after Wyatt had persuaded her to broke up with Hal Breckenridge her current boyfriend, she also had a child of him, Flower, but that didn't avoid him from inviting her to move in and she did. However MaryKay was terrified by Ursula because she was a child! MaryKay hated children and she quickly made enemies with Ursula and started bullying her, Alfred also disgusted her due to his Insane trait and Mean Spirit, and she couldn't stand it, that made her run away and never come back, fortunately for Wyatt he had much emotional support from his family.

Wyatt blamed Alfred for MaryKay's fled, and he realized that Alfred envied his status over the family, thus they got enemies and Wyatt accused Alfred of being Insane, Alfred also started to prank Wyatt a lot and that made him irate and the parents punished him. Another thing that made him very stressed was the lack of romantic relationships, which led him to try to seduce the athletic Maximus McDermott, however he didn't proceed it after getting accepted; the hard work also stressed him - he saved Heather Crosby from the fires and rescued the entire school after another fire, while at spa a mutant plant ate many people, he however killed it successfully.

Hopefully, he got free vacation, in order to enjoy times without hard work or the annoying Alfred. After they got home, a new butler was hired, Feliciana Dantas, as the previous had left due to his no connection with the family members.

He started dating a woman, Melanie Cole, whom he met while running to work. They met at Bistro many times for romantic dinners. She was an ambitious woman who aspired to be the leader of the free world, she was however very sweet and loved children, unlike MaryKay Shallow. Meanwhile, his happiness motivated him at his job, getting many promotions by saving people from massive and deadly flames.

His proposal to Melanie was something very romantic, they were both at her house and they were star gazing and Wyatt did it. Melanie, euphorically, accepted with a kiss on his lips.

He had a traditional bachelor party and only male friends were invited. They had much fun, especially with the entertainers. The party ended up when only the day after at an early time.

After that Wyatt and Melanie got married at a traditional ceremony with all the family, who cried the event. Alfred was the exception, he didn't really care about his brother and was gardening while they were exchanging rings. But at the end of the ceremony, two vampires, Leopoldo Crosby and Dallas Shallow, who were trying to refrain from attacking the innocent Sims' plasma died, all people were euphorically dancing at that moment, stopped to mourn the deaths. Wyatt was particularly affected by these deaths, both vampires were old childhood friends with him. The next days were bipolulary lived by the couple, Alfred tried to disturb them, the deaths of the friends still were in Wyatt's head but he was still with the person he loved. After some romance and tries the family welcomed the first pregnancy of Melanie. 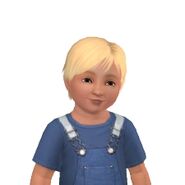 Wyatt as a toddler. 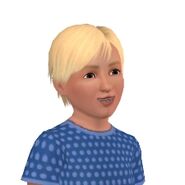 Wyatt as a child. 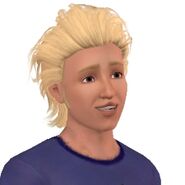 First Wyatt's appearance as a teen. 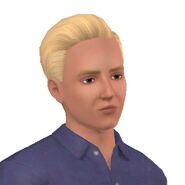 Second Wyatt's appearance as a teen.
Add an image to this gallery
Retrieved from "https://sims.fandom.com/wiki/Fanon:Wyatt_Garvouis?oldid=674486"
Community content is available under CC-BY-SA unless otherwise noted.