The Wizard Family was started by Sebastian and Lee Wizard, who are the grandsons of the Original 8. They started the family to focus on wizard magic, hence the name of the family. It consists of Sebastian Wizard, Lee Wizard, and their son Bill Wizard.

Sebastian and Lee decided that they needed to start their own family, so they moved out as soon as they were engaged. Because Lee is David Harper's son, David gave them the lot next door. After they got settled in, they had their son Bill. Shortly after, Sebastian decided that the family needed another source of income, so he purchased a lot and made it a barber shop. It was about this time that Lee disappeared in the middle of the night. When he returned, he claimed that he was taken up into the sky by a bright light and tested on. First he was made into a furry creature and then into a cold and lifeless creature. Luckily Lee was able to create potions to cure himself, but the whole ordeal took a toll on him. His family fears he will never be the same again. 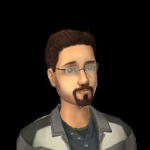