The Sims Wiki
Register
Don't have an account?
Sign In
in: Fanon created and owned by AldoHyde, Families (fanon), STM Sims (fanon),
and 5 more

"James and Susan Windmark" are the new names chosen by Loki and Circe Beaker, recurring characters in the StrangeTown Monty (STM) Machinima Series. The name "Windmark" is a reference to the main Observer villain in Fringe Season 5.

Before the events of StrangeTown Monty, Loki and Circe conducted endless unethical experiments on poor Nervous Subject. They did not even bother to give this poor boy a proper name, as his moniker "Nervous Subject" only reflects his role as their guinea pig. They were fully aware that Nervous resented them, but was simply powerless to successfully retaliate or break free.

The Beakers do not seem to have any reservations about "using" or mistreating other people. They had also imprisoned other hostages in their castle, and were (usually) successful in not letting them discover each other's presence. 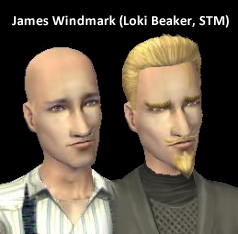 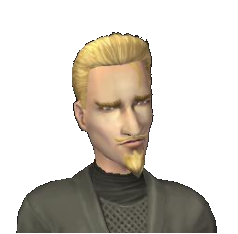 Due to their shared scientific interests and Evil trait, Loki and Circe are often in agreement over many issues, and enjoy a strong marriage.

But there is another woman in Loki Beaker's life: his younger sister Erin, who was somehow taken in by Ajay Loner, that lily-livered mercenary. However, Loki would rather have Loner as a potential brother-in-law than any of the Curious Brothers.

The Beakers' nefarious schemes came to an abrupt halt one day, when they were unusually careless. They clearly underestimated Nervous Subject...

Two years later, Loki and Circe secretly resurfaced in Strangetown. The Strangetown residents expected them to be away for much longer.

Naturally, they went straight for Erin Beaker(*). Luckily for them, Erin cares enough about her brother to consider helping the couple in their "transformation". Erin is the first to know about the Beaker couple's new aliases. She does not hesitate to help her brother get used to being called "James Windmark".

Can the Beakers / Windmarks succeed in their next scheme after their "transformation"? Or will their past come back to haunt them? 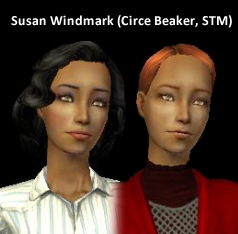 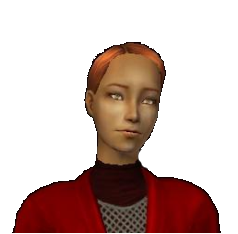 As the Beakers, they were notorious for their ninja suits.
As the Windmarks, what will their trademark attire be...?

In the Football Universe, Loki and Circe both played for Team STM in the 2015 Match.

Their son, Albert, became their successor in the 2035 Match.

Loki and Circe are in Team Beaker in the Battle of Strangetown.

(*) Some fans thought the "two ninjas" in STM 2.03 necessarily came for Bella Goth. But in STM, Bella is portrayed as a peripheral figure, very much unlike how many Sims fans tend to focus almost all their attention on the Goths whenever any Goth family member is present in a Sims story.

STM's "Bella Goth Case" is NOT about Bella's personal story. The focus is on HOW Ajay Loner and Erin Beaker handle the case.