In my player stories Vidcund has mended his friendship with his ex-girlfriend Circe Beaker, though they haven't rekindled their romance due to their respective reasons. It should be noted that at one point when playing the Sims 2, Vidcund shoved Circe for spying on him through her telescope. Vidcund and Lazlo are now married to their half-sisters Lola and Curious respectively. I know it sounds rather odd but the game didn't consider them to be related and anyway, what would you expect to happen in such an unusual town?

Vidcund has also improved his relationship with his old rival Loki Beaker. Now that Vidcund and Pascal are in respective relationships, they decided that it was no longer relevant to continue their feud with Loki. They had moved on from trying to win the heart of their former crush Circe. Many hold Loki to be an experimental, yet villainous scientist. But Vidcund and Pascal (and Lazlo) still wanted to be on good terms with their old enemy nonetheless. This is because they all had the same career path and the four of them needed to make more friends to work their way up. Pascal's promotion to Mad Scientist and Vidcund's credit for standing out as the brains of the operation did come as an unpleasant surprise for Loki. But this surprisingly did not bring tension to the four scientists.

A notable difference in my player stories is that Lola and Chloe Curious are considerably older than their pre-made counterparts. So they are now the older half-sisters of Jenny, Pascal and (in Chloe's case) Vidcund. The reason why I decided to age Lola and Chloe is because they were born first, as referenced in the storytelling images.

In my gameplay Vidcund is portrayed to be more outgoing and serious than his default counterpart, while the serious side of Pascal's character was previously overlooked. Since the start of the Sims 2, the Curious brothers have risen through the ranks of the Science career along with Loki Beaker. Vidcund and Lazlo have reached level nine, while Pascal and Loki have reached level ten.

Vidcund didn't get abducted by aliens in my player stories gameplay wise. This is due to the fact that I reset the household from scratch. I later regretted this but fortunately I managed to restore the household to its former glory. With the Tombstone of Life and Death, I used my own version of Pollination Technician to impregnate Vidcund instead of letting the game use the same default over and over - especially when he'd already impregnated Pascal, and my CAS Sim Kingston Starker. My own PT and the default are quite similar, yet quite different in appearance but no matter. Vidcund gave birth to a baby girl named Dakota. She is now a Pleasure Sim who works in the Culinary career. 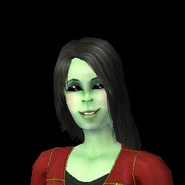 Vidcund's daughter Dakota.
Add an image to this gallery

Retrieved from "https://sims.fandom.com/wiki/Fanon:Vidcund_Curious_(C.Syde)?oldid=910323"
Community content is available under CC-BY-SA unless otherwise noted.