Victoria "Vicky" Toadstool is the youngest sister of Astrid, the youngest daughter of Jebidah and Felicia, the niece of Grant and Harmony, and the cousin of Nia. She was born on June 15, 2016.

Felicia announces she is pregnant with Vicky on September 9, 2015. On June 15, 2016, she was born. After she is introduced to Astrid, she is told her name is Victoria. Astrid comes up with the nickname "Vicky" for her, and they like it.

Vicky appears in this story when she is four years old. However, when Nia accidentally creates an alternate universe with the mysterious flash drive, Nia wakes up in a universe where her uncle and aunt divorced five years ago, and Vicky was never born. So she doesn't exist! She exists again after Nia fixes it.

A version of Vicky also existed in A Sim's Tale universe. However, this Vicky was older than her original counterpart (but still several years younger than Astrid). She also had an Imaginary Friend dubbed Jelly-Bean.

Vicky and her family moved from Riverview to Sunset Valley after her father got a new job there. But, Vicky was unable to attend her first day of school since she got the flu.

Four years later, Vicky finally became a high schooler. She was among the girls who obsessed with the teen pop idol, Lance Lewis who just moved to the town and enrolled in their school. She thought the shaking caused by Matilda was the biggest earthquake ever. 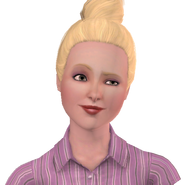 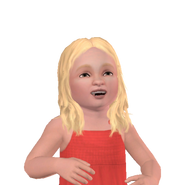 2020
Add an image to this gallery
Retrieved from "https://sims.fandom.com/wiki/Fanon:Vicky_Toadstool?oldid=778813"
Community content is available under CC-BY-SA unless otherwise noted.