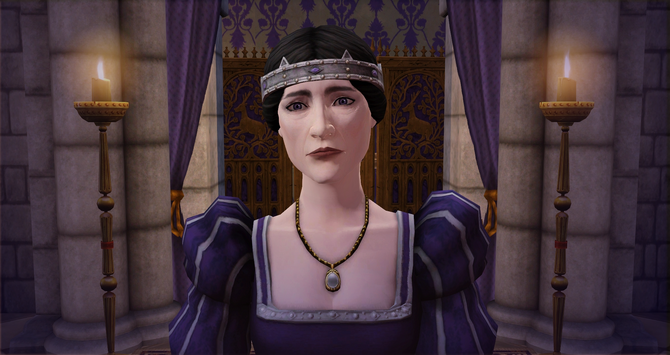 Listen  /ˈvɑː.ni.tɑːs fɔːn ˈswaɪɡər/) is the only child of Queen Mallory and King Brennan and was one of the monarchs of the Kingdom of Autumn Falls. She is one of the earliest known members of the Schweiger family.

Vanitas is a very pale thin adult woman with darkened lips and long black hair twisted into a bun. A silver crown adorned with amethysts sits on her head and she wears a long violet noble dress. Around her neck she wears a golden necklace also decorated with an amethyst.

Vanitas' only appearance is in The Sims Medieval. She died sometime after the events of that game. Her cause of death is unknown.

She remains deceased in the other titles of The Sims series and since her relation to the Schweiger family is so distant she doesn't even appear in the family tree.

Life leading up to The Sims MedievalEdit

Vanitas was born as the castle was being built and before her parents officially became monarchs. She was a young child on their coronation day. She became the queen herself once she reached adulthood. Her reign wasn't very eventful, although she continued what her parents began und kept building up the Kingdom of Autumn Falls.

There are rumors that she fell in love with the local bard.

Life after The Sims MedievalEdit

She did not further pursue her true love and married a duke from a nearby kingdom. Her cause of death remains unknown to this day.

Retrieved from "https://sims.fandom.com/wiki/Fanon:Vanitas_von_Swaiger?oldid=843353"
Community content is available under CC-BY-SA unless otherwise noted.