Disclaimer
Some content in this narrative is not suitable for children under the age of thirteen years, as it contains some violence and coarse language. Caution is advised. 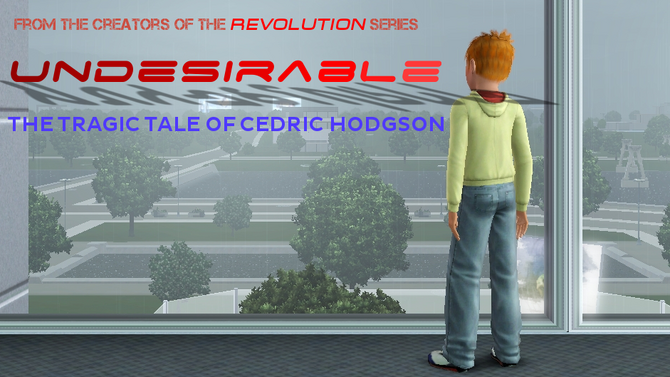 Undesirable is a stand-alone story set in the universe of the Revolution series by WikiBuilder1147, K6ka and OpelSpeedster. It follows the life of Cedric Hodgson from start to end.

"Get out!" the guard screamed. The recipient of the order was a six-year-old boy. He lay on a metal slab that served as a bed. He slowly sat up.

"Get out! Now!" the guard shouted. The boy, exhausted, slid onto the floor. As his feet hit the floor, a burning sensation rushed through his body. His legs strained under the weight. The boy collapsed.

"Up! Get up right now!" the guard demanded. He stormed up to his victim. His tall, strong form towered over his prisoner's crumpled body. He unsheathed a long stick from his belt. He pressed a button. Electricity began to surge through the weapon. He raised it and struck it upon the boy. The child's body spasmed with pain. He shouted out as the current attacked every fibre in his being.

When the boy finally managed to stand up, he put his hands on the wall and pushed his way out of his cell.

He followed another guard. Behind him was the soldier who had given him so much torment moments earlier. When the three reached their destination, he looked up. His mother and father were there.

"Cedric!" the boy's mother screamed. He limped towards her.

"Mum...," he croaked. They hugged. Then Cedric and his father embraced.

"Don't worry, son. It'll all be over soon," his father whispered.

"Alright, huggy-time's over," another prison guard growled mockingly. "These shows of affection disgust me. Put 'em in."

The guards forced the three prisoners into chairs. Then they fastened the restraints onto their arms and legs.

"For the last time," he began. "Tell us who else must be arrested for their crimes?"

"No one else has to die," Cedric's father proclaimed.

"TELL US!" the guard shrieked. He slapped the man before him.

"There is nothing to say," said Cedric's mother defiantly. The soldier punched her in the stomach fiercely.

The guard then turned to Cedric. "And what do you have to say for yourself, boy?"

"I'd rather die than to betray my sister to your stinking Government filth," Cedric croaked bravely. He spat onto the guard's boot.

The family's incarcerator glared at Cedric fiercely before storming off to a console. "That can be arranged." He placed his hand on a dial.

Cedric shut his eyes tightly and waited for the painful end.

Retrieved from "https://sims.fandom.com/wiki/Fanon:Undesirable?oldid=633661"
Community content is available under CC-BY-SA unless otherwise noted.