Fanon article ownership
This fanon page was created and is owned by 88ZombieCarlLarceibmoz88 (talk). Unless the edit is constructive and/or minor (such as fixing a template), please do not edit this page unless given permission from the author.

Tyrone Racket-Castor is a teenage Sim living in Twinbrook. His mother, Beverly Castor, had an affair with Bill Racket and got pregnant by him. When Tyrone was born, his mother abandoned him to save her marriage and his father took him in. Tyrone did not like living with his father, but it was better than nothing. When Tyrone turned 15, he moved out of his dad's house and bought his own house at 39 Sweetwater Loop. The house wasn't cheap but he knew the owner and they gave him a deal, knowing of his tough situation. Tyrone slowly became a frugal mooch because he was so tight on money. He decided to get a job at "Always Studious Bookstore" which he worked hard at and quickly got promotions. When he finally decided it was time to find a date and make some new friends, he stumbled across the gorgeous Jade Greenwood who lived down the road. The duo clicked and soon started dating. Prom was coming around the corner and Tyrone was prepared in advance. At the prom, Tyrone became the prom king! Tyrone then noticed he was not making enough profit so he used his old guitar and took up the guitar skill. He usually played at the Twinbrook Plaza until curfew, after his homework and job were completed. Tyrone's playing got so much attention that he became a 3-star celebrity! He still lives in his little house however, not letting the fame go to his head. 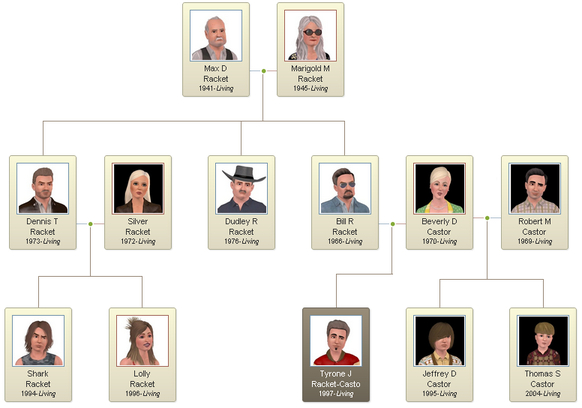 Retrieved from "https://sims.fandom.com/wiki/Fanon:Tyrone_Racket-Castor?oldid=788279"
Community content is available under CC-BY-SA unless otherwise noted.