Toby Space is the son of Summer and Allen and the older brother of Nora. He married a woman called Rose and was amazed he actually found somebody who was like him.

Before he was born, Summer and Allen had a relatively easy romance. They met as Children and soon became friends. His parents approved of their friendship as Allen's family were rich just like them. As, teens the inevitable happened and they fell in love. They soon went to college together and after they overcame a few problems with friends, they became the resident couple. After they graduated, they married and soon Summer was pregnant. They were happy and began preparing for the new baby.

As a baby, Toby was cared for by Summer and Allen at first... Summer soon became obsessed with finding Bella Goth and neglected her family. Although Toby was still cared for, he was only cared for by Allen not Summer

As a toddler, Toby's sister Nora was born although his Mum didn't really care. Toby was taught all his toddler skills by his overworked father who also had to take care of Nora and have a job. One day, Toby heard his Mum calling and his Dad running upstairs and after that his Mummy wasn't there, caring or otherwise. After that Toby only saw his dad and his sister, he wondered what was wrong. His dad at one point careful helped him write 'Missing you Mummy' at the bottom of the poster.

As a child, his father finally told him what had happened. Although he wanted his Mum back and was desperate to look, he just couldn't make himself and stayed away from the telescope at all costs. He was interested in Science but not the paranormal kind. He hoped his mum would come back as he wanted to get to know her and have her in his life. Toy was very good with his little sister and Allen was very grateful for the help as he had to work and he was a bit suspicious about the nanny... Toby began to reexamine his father. He was nice and where had it got him? No wife, poorest of his siblings and struggling with work. if nice got you nowhere, surely the opposite worked...

As a teen, Toby continued his fortune by getting a part-time job and working hard at school so his relatives would give him money as rewards. He went to the top of his career and began a relationship with a girl called Layla Jane. She wasn't fortune aspiration like him but she accepted him and didn't get in the way like other girls. Toby went on holiday with his father, his sister, Roger and Audrey. Despite the sun, he just stayed inside. He had a holiday romance with a girl called Amber much to everyone's shock but he only used her to help him count up sums. She lived in Desiderata Valley and asked to stay in contact but he said no and they broke up. He came home with an exact sum of money and memories of a girl who's name he had already forgotten. He didn't tell Layla as she was just there for his reputation and so his father wouldn't bug him about being anti-social. Although, Layla was nothing to him, he meant the world to her so when she hinted that maybe he could once in a while act like a couple then maybe that would be better. Toby just laughed at her request and told her she was being stupid. Layla broke up with him but he didn't care. She was merely an obstacle that had been overcome and he was now one step closer to millionaire/world domination dreams. Toby decided that college was the way to go and got into Academie le Tour. He was excited about leaving as he was going to be on his own. He was surprised that Nora was equally happy to him. She hardly ever supported him.

As a young adult, Toby moved into a residence by himself. He was happy as he had no roommates bugging him. He loved college and took up a Business major. He was very good at it and got on the Dean's list. Also as a Sophomore he was offered a job at a Business firm when he left which pay him quite a lot. He was overjoyed about this as he would have enough for his own place so he wouldn't have to go home after he graduated. He rung Nora and Allen to tell them. Allen was sad but Nora was very supportive of him living by himself. He was confused, why was Nora so happy about this? Toby graduated as the highest in his class... which surprised nobody.

As an Adult, Toby rented an apartment and bought a piece of land... for a future manor. Toby soon became promoted and was made to watch over the interns who came. Usually he was unimpressed by them but one intern surprised him. A woman called Rosalind or Rose. He considered promoting her there and then but figured he should get to know her. He asked her out to dinner and although it was purely for work, news went round saying that the ice king Toby was going on a date! He scorned at them but on the 'date' he realised something. Rose was a keeper. So he politely asked her if she would like to go out to dinner with him 'romantically'. She agreed and they became officially dating. Toby rung his sister as she insisted he call him once a month so she scorn over his cold life of no love or friends. Nora insisted on meeting Rose to check she was real. Nora visited and left looking vaguely amused. Toby could not figure out why this was. Toby decided that if he really wanted to keep Rose he had better do something fast as he would never found somebody who would agree to be with him. He proposed to her and she said yes. They had a short but sweet wedding where only family were invited... which brought the total up to about 50. Toby and Rose bought some land to build a house as building was cheaper than buying. Toby noticed that Rose was getting fatter and soon realised she was pregnant. He was delighted as he now had a little heir to carry on the business.

Around the time of Rose's pregnancy, Toby hired a new secretary, Genevieve. She accidentally admitted to having a slight crush him on the first day she worked there and strangely, Toby found this oddly flattering. He decided that he loved Rose but he she was a strong, intelligent woman with opinions and views of her own. In Toby's eyes, Genevieve was a little pathetic but she saw Toby as an incredible god like figure and Toby began to enjoy her adoration. When Rose went on maternity leave she decided that she wanted to quit the company and decided she wanted to go into investment instead. She became a small business investor and used Toby's increasing fortune to help small businesses get off the ground. Toby began to see Genevieve and he was planning to take her to dinner when his father called and invited Toby to meet his new girlfriend, Anne. Toby wanted to miss it but Rose insisted he had to. Begrudgingly, Toby cancelled his reservation and went to dinner with Rose. Nora had recently started living with Toby for financial reasons and Toby decided he needed to lecture her on why this had happened. He tried to make it extra patronising. He was just getting to the part where he 'accidentally' criticised everything about her when Nora snapped and yelled at him. That shut him up. The tension began to rise again when there was a knock on the door. Allen jumped up to answer the door and Toby could tell from Allen's expression it was somebody important. Toby leaned over to see who it was and he saw a woman he had not seen in a long time. His mother.

And he felt nothing.

Whilst everybody else seemed shocked at her return, Toby felt almost disappointed to see her. Couldn't she see they were having dinner? This was rather inconvenient for everybody. He decided to zone out for a bit and envision his house once it was finished. He began to think about what he would do tomorrow. Perhaps he would take Genevieve out for dinner and buy her a dozen white lilies. Or maybe orange lilies. He couldn't remember which kind she had mentioned liking. Or perhaps, he would buy her a car as way of apology. Yes, a nice red convertible. She would like that.

When he zoned back in again, Summer was deep in conversation and nobody had noticed Toby's temporary mental absence. She was babbling on about some girl called Zoe who had died by falling off of a bridge. Summer seemed upset when telling this but she still seemed manic. Toby didn't like this, he had always hated when people had told personal stories as they became so invested in them and told them with such passion that it was overwhelming. He preferred when people talked about statistics, they didn't allow the speaker to get too emotional and if they did somehow get too involved in their speech - Toby fired them. Cool indifference was vital for a workplace environment.

He noticed that Nora was standing up and going upstairs. If Nora felt it was appropriate to leave then he could leave to. He grabbed Rose's arm and began to pull her out. He muttered goodbye as he grabbed his coat and pulled them both out of the door. "What are you doing?" She asked him as he pulled her into the car, "Ow, that hurts, Toby, let my arm go." She whimpered slightly and he let her arm fall to her side. "Toby?" She said as he started to car and pulled away, "Are you okay? I know this is a lot to take in..." He didn't reply as there was no need to. This had been no ordinary night, that was for sure but overall he was okay. This wouldn't affect his life too much if he didn't let it and he could continue as normal.

As they drove, he decided that he was going to get Genevieve a car. Although not a red one, a green one. That would show he was sorry and car buying always allowed him to remove annoying memories from his mind. 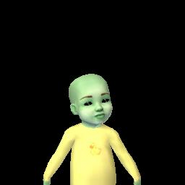 Toby Space as a Baby. 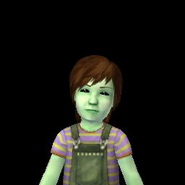 Toby Space as a Toddler. 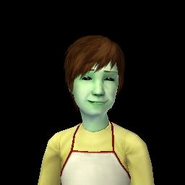 Toby Space as a Child. 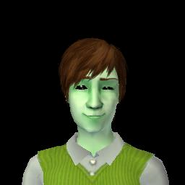 Toby Space as a Teen. 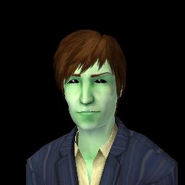 Toby Space as an Adult. 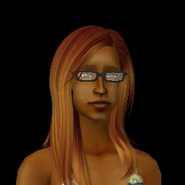 Rose Dai, Toby's Wife.
Add an image to this gallery
Retrieved from "https://sims.fandom.com/wiki/Fanon:Toby_Space?oldid=724736"
Community content is available under CC-BY-SA unless otherwise noted.