Tiffany Curious (née Riley) is the wife of Joshua Curious and mother of Vin and Harper Curious.

There's not much known about Tiffany's earlier life. She meets Joshua and Lucas Curious during her teenage years and creates a friendship with Joshua.

Together with Joshua, Lucas and Camryn McGaw she enters college and chooses the drama major. She doesn't notice the crush Joshua has on her and is enjoying her college life with Abhijeet Cho as they share their first kiss and later also their first WooHoo.

She doesn't seem to be serious about their relationship because she also WooHoo's with Armando Parker during her freshman year and with Armando Sicat and Grant Downie during her sophomore year. It's only in her junior year that she notices Joshua's crush and discovers she really likes him, this might be because she changed her aspiration from romance to popularity

Because she was busy with the boys instead of college her achievements are so-so and she graduates without any honors. Joshua proposes to Tiffany and she gladly accepts.

Tiffany moved into 4 Cover Up Road, where Joshua lives with his brother Lucas and sister-in-law Camryn. She got a job in the politics career. Tiffany marries Joshua and she gets pregnant just after Camryn discovers her pregnancy. She gives birth to a boy: Vin Curious.

When promoted she meets Abhijeet Cho, an old lover she used to date during her college years. They talk about their past and how they turned out right now. Abhijeet is surprised by the fact that Tiffany is married, as she was quite the wild girl when they were together. They think back about their relationship and about how they were each other's first WooHoo, suddenly the feelings from back then were so strong again and Tiffany and Abhijeet did WooHoo once again, Tiffany cheating on her husband Joshua.

The next day Tiffany is devastated and immediately cuts off any contact with Abhijeet. She has no clue how she ever could tell Joshua so she doesn't. Instead of telling Joshua she talks with him about getting another baby and not much later she turns out to be pregnant.

She gives birth to a girl named Harper. Although Tiffany is pretty sure the father of Harper must be Joshua, there is a small chance that her father is Abhijeet. Especially because she has blonde hair and grey eyes, but the grey eyes could come from Tiffany and the blonde genes are present in Joshua's ancestors.

Tiffany was later promoted to mayor, fulfilling her lifetime want and being released from any unwanted visits of Abhijeet. Both Vin and Harper got in private school.

When Tiffany became an elder she starts thinking about her daughter Harper and her real father. She isn't sure if she should talk with her daughter about it (before it's too late). However she's afraid to lose Joshua and maybe even her daughter as well. When Tiffany retires she moves out together with her husband to let the current generation create their own families. With death approaching Tiffany got more uncomfortable, it got so bad that she couldn't enjoy the birth of her grandson Sander and the happiness of their children anymore. With the death of Joshua she decided that it was faith that didn't want him to know about Harper, so again she decided not to tell anything to her daughter. She changed her mind one more time on her death bed, where she told Harper everything about her real father Abhijeet, who had died shortly after the death of Joshua. As expected Harper was deeply shocked and refused to see Tiffany again till after her death. 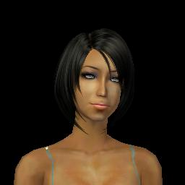 Tiffany as a young adult. 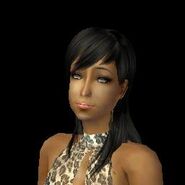 Tiffany as an adult. 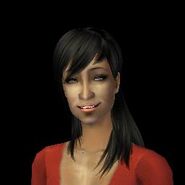 Tiffany as an elder.
Add an image to this gallery
Retrieved from "https://sims.fandom.com/wiki/Fanon:Tiffany_Curious?oldid=744706"
Community content is available under CC-BY-SA unless otherwise noted.