Fanon article ownership
This fanon page was created and is owned by JM9193 (talk). Unless the edit is constructive and/or minor (such as fixing a template), please do not edit this page unless given permission from the author.

Tiara Dortheimer was born in the sleepy town of Huntsville. She lived in a huge red seashore villa with her parents, her aunt Déborah and her grandmother Amanda. She was mostly raised by her father, since her mother Gladys is a workaholic, who is obsessed with money. She learnt all of her toddler skills thanks to her father and her aunt, but was still best friends forever with her mother and grandma.

On her birthday, Amanda tried to cook a Baked Alaska, but this resulted into a massive fire that destroyed the whole house, and killing Amanda. Her family decided to leave the area to start a new life.

They moved into the rural town of Riverblossom Hills, in another yet smaller villa. It was a rainy day, and unfortunately, her father Pedro died struck by lightning. In order to try to consolate her, Gladys and Déborah bought her the two pets she had always asked for: a large and old dog called Lakshmi and a Birman cat called Pemphrédo. She quickly became "Mine" to Pemphrédo, but doesn't like Lakshmi a lot.

Gladys and Déborah had to call for a nanny, Lexie Andersen, since Pedro was not here anymore to take care of her. Moreover, in addition to their regular work, Gladys bought a restaurant, Le Dindon Gras, and she and Déborah worked hard to make it the best restaurant in town. She and Lexie are still friends. She also became friends with a young boy named Nery Miguel after having brought him home after school. She also enjoys wolves, and is acquainted with three of them.

She worked hard to be the best student of her class, and since her mother and aunt also worked a lot, the three went to vacation. The went in a 3-§ hotel in Three Lakes. The first day was mainly constituted by various tours, and her aunt discovered an old map. However, unlike Déborah and Gladys, Tiara was not allowed to go with them, and subsequently did not see Bigfoot. She was fishing during this time, and got a bronze badge in Fishing. The next day, Tiara and her family went to the spa and they had a great time together.

When they came back home, Gladys bought a vacation lot in Three Lakes since she enjoyed the trip a lot. However, Gladys discovered that a rich businessman Hervé Marveilhac bought a restaurant and it is concurrencing her mother's. After that, Gladys and Déborah spent most of her time trying to drive Marveilhac's restaurant to Bankruptcy, when they were not working and Tiara spent most of her time with her nanny.

Tiara was pretty scared when Déborah got electrocuted thrice in a row while repairing the computer, and unfortunately for her, her fear of having an enemy became true (she couldn't bear her classmate Virginia Gothier), and she grew up badly. She became then really interested in family, and aimed at going to university as soon as possible.

She was happy to get a new family member - Déborah got married to a townie named Sinjin Couderc, and she befriended her new uncle. However, the welfare wa short-lived. The next day, the dog Lakshmi died of old age, and everyone was kind of sad.

Tiara then decided to go to college. She obtained two scholarships: the Hogan Award for Athletics and the SimCity Scholar's Grant. She went to La Fiesta Tech and since she aims at working in the Law, she took the History Major. During the first semester, she mostly worked and built toys, her favorite hobby. She got the best possible grades for this semester. She then learnt that she had got a cousin, named Océane.

She met a nice guy called Gaël. The two quickly became friends. And they fell in love. They got engaged and moved in together. She quickly learnt that he was a member of a secret society, and he bought home the dreadful Cowplant. During their university years, six people were eaten...

She got the golden badge in Toy Making and graduated with the honors, as well as her fiancé. They both got back to Tiara's home. Things did not change much while they were studying: Gladys still a workaholic and the restaurant was as wealthy as ever. There also were two new dogs: Cobalt and Bongadrum, and an employee of the restaurant, Coralie Lepaire, moved in. Tiara married Gaël, and took a job in the Law career track. And she quickly got pregnant. But a sad event occurred: Gladys, who was obsessed too much with her restaurant, died by Rally Forth a few days before becoming an elder. As a family Sim, Tiara was inconsolable.

She gave birth to a daughter, Arlette, and simultaneously, Tiara's cousin Océane grew up into an adult. However, quickly after, the dear friend Coralie died of Old Age. Hopefully, Gaël was skilled enough to replace her at the restaurant, which was prized many times.

Then, an unanticipated event occurred. Gaël, while looking through the telescope, got kidnapped by an UFO. He got pregnant, and feared what Tiara would say about it. Hopefully, she was family-oriented enough to accept the child as her own. A little Guillaume was then born.

Following the birth, a series of unfortunate events hit Tiara: first, her aunt Déborah became both a witch and a werewolf, and she transformed Gaël (both were glad about it since they were knowledge Sims, but Tiara was pretty saddened). The constant fights opposing Cobalt and Bongodrum finally led to their fleeing. Moreover, Pemphrédo died, and Tiara narrowly avoided aspiration desesperation. To consolate her, however, she successfully taught Arlette to Study and the two missing pets were brought back by a university teacher, which became best friends with Tiara.

Arlette grew up into a teen and her great-aunt turned her into a good witch. She got the best grades at school, and gained two Scholarships, and Tiara reached the top of her career, becoming a feared judge, while Océane constantly got blind dates.

Déborah's and Gaël's deaths, respectively from Old Age and Illness, were too much for Tiara, and she decided to move out with her whole family. She took everything (including the gravestones) and moved into a huge greenhouse lot (greenhouse upstairs, normal house downstairs), and grew into an elder.

She retired and celebrated it by inviting the three other members of the family to Twikkii Island, where she bought a huge house. She got the voodoo doll, but the four tourists mostly played poker, and they all reached the maximum enthusiasm in Game.

When they got back home, a tragic event occurred: both Bongodrum and Cobalt died of old age the same day! Tiara was really saddened and decided to never buy another pet. She had a blind date with a Sim named Jihoon Hsu, and it was really successful as the two fell in love.

Shortly after, Arlette finally decided to go to college, and she quickly graduated with honors, just like Tiara herself, and got a job in the Entertainment career track at the second to last level. However, she did not come back alone: she got the golden badge in Robotics while studying, and she built a Servo: Ingeborg. Arlette also married a rich Sim called René du Peller, who was much older than her (5 days before becoming an elder). Tiara didn't like René, but her cousin Océane hated him, and they constantly fought.

Tiara lived enough to see the birth of her two grandchildren, Lunaire and Mélanie before dying the day Mélanie was born. 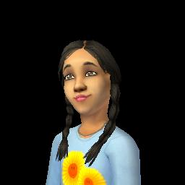 Tiara as a child 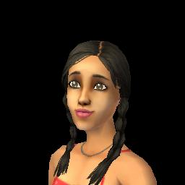 Tiara as a teen 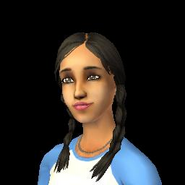 Tiara as she appeared at university 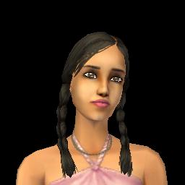 Tiara as an Adult
Add an image to this gallery
Retrieved from "https://sims.fandom.com/wiki/Fanon:Tiara_Dortheimer?oldid=901832"
Community content is available under CC-BY-SA unless otherwise noted.