The Hamilton Family resides in Hampshire , a custom made world. The have two properties under their name that is said to be in the "Hamilton Estate" that is next to the Golden Hills neighbourhood in the world. Their family is the second wealthiest family in the town. First being the Nair Dynasty .

The first household concists of one sim: Howard Hamilton III. The second concists of howard's parents , Danita and Joseph.

According to the household description , Howard inherited the family money and businesses suddenly when his uncle died. His parents do not live with him because he doesn't want to "deal" with them. His parents live in the guest house .

The guest house and The Mansion both have hidden features introduced in The Sims 3: World Adventures .

Most of the Hamilton family is deceased ( due to a over 200 year-old family tree). 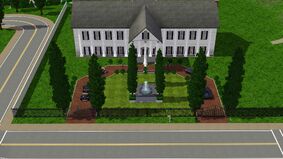 Hamilton Hall
Add an image to this gallery

Retrieved from "https://sims.fandom.com/wiki/Fanon:The_Hamilton_Family?oldid=897758"
Community content is available under CC-BY-SA unless otherwise noted.