Tessa Curious (née Singles, her birthmother's name Curious or her other mother's name Loste) is the daughter of Lola Loste and Kristen Loste. She is important in the Curious household as the wife of Lucifer Curious.

Tessa's parents changed their names from Singles to Loste when Tessa moved out, leaving her named Singles until her marriage with Lucifer.

It is known that male aliens like Pollination Technician can impregnate male Sims. But Lola had no clue she could impregnate women and... herself! She was shocked and thrilled at the same time. Her sister Chloe, now aware of this impregnated her partner Erin Beaker with success, as she thought a pregnancy must be awful to deal with.

When Tessa was born it was clear by her brown hair that Kristen Loste was her other parent, what made sense as Lola and Kristen are married.

Tessa always knew she was different, but she also knew she wasn't the only one. She met the three Curious cousins in high school and she fell in love with Lucifer, he answered her love and they starting dating. Both of them nor their parents were aware that they are actually 'half-cousins', as in Pascal, Vidcund and Lazlo are actually half-brothers of Lola and Chloe. The only person who could know was their human father Glarn Curious but he was already deceased before Lucifer was even born.

Tessa is a few days younger than Lucifer so she was happy when she finally grew up and could move in with him to start their own family. Moving in the Curious household didn't bring much peace to the couple, as it was already a crowded place. There was a new baby born, her grandnephew Drew and the later to be known grandniece Sarah was on her way. In the mean time she creates a pretty good friendship with her 'cousins-in-law' partner's Marsha and River

Lucifer and Tessa decided to take things slow and just get engaged for a while. When Klatu and Marsha with their son Drew moved out due some relationship problems Lucifer and Tessa got married and shared their first WooHoo after their marriage, hoping for their first pregnancy.

It seems that Tessa got pregnant very fast and gave after the normal 3 days of pregnancy birth to TWINS! Two boys named Lucas (the oldest) and Joshua Curious

Just a few days away from her elderhood Tessa's parents die shortly after each other of old age, she is saddened but knows she wasn't really that close with her parents as Lucifer was to his father.

When turning an elder Tessa decides not to retire, what surprises Lucifer because he loves his free time. Tessa also notices that Lucifer is trying to got their sons into college and encourages them to apply for some scholarships. When Nikto and River leave the household Lucifer and Tessa decide to join them, leaving the house for Lucifer's cousins children.

Tessa is in tears when attending her twin boys graduation party. Not only did they have a great education, but they are both engaged! She doesn't have to wait long for their marriage and is thrilled to discover that she is going to be a grandmother by both of her sons soon. After the birth of Deena and Vin her husband Lucifer dies, leaving her with mixed feelings. As she misses her husband a lot and is heartbroken, together with the joy of new children on this earth. She dies only a few days later. 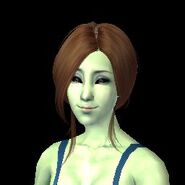 Tessa as an adult. 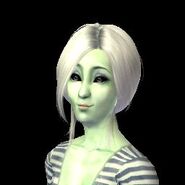 Tessa as an elder.

Tessa's family tree.
Add an image to this gallery
Retrieved from "https://sims.fandom.com/wiki/Fanon:Tessa_Curious?oldid=743011"
Community content is available under CC-BY-SA unless otherwise noted.