Terrance Jeffery Ho "Terry"​ is a teen sim currently living in Sunset Valley .  He moved there from Isla Paradiso with his parents, Latricia and Jeffery, just after school started.  He is an aspiring journalist.

Not much is known about Terry's childhood.  His father, Jeffery, is Caucasian and Chinese, and his mother, Latricia, is African American.  What is known is that he did have an older brother, Diego, who died.  Latricia Ho's lifetime want is to be an Alchemy Artisan, and it is from her that Terry inherited his intellectual side.  Jeffery Ho wants to be a Great Explorer, and his main hobby is scuba diving.

As a teenager, he and his family moved to Sunset Valley, in the old Bachelor home on Sim Lane.  When he started at Community School for the Gifted, he became friends with some of the most popular kids in the school, including Skylar Cheesman, the undisputed 'queen bee' at CSG.  When Skylar had been grounded by her mother, Savannah, and forbidden to attend a school dance, Terry offered to send her video of the dance.

Then, Terry joined the school's creative writing club, where he met and fell head over heels for Skylar's cousin, Kaydence Plumb.

This caused friction between Terry and Skylar.  Skylar, as you could imagine, wasn't very happy with the relationship. She pretended to put on a happy face, but her envy showed through the smiles.  She was in utter disbelief that Terry had chosen bookish Kaydence over her, aspiring pop star and the most popular girl in school. Needless to say, after Terry began dating Kaydence, their friendship cooled.

He pursued Kaydence by leaving written messages in her locker, each one more forward than the one before it.

Terry's life completely changed the minute he laid eyes on Kaydence. He'd been overweight and insecure, with a touch of grumpiness, but Kaydence's enthusiasm and zest for life was infectious. At times, though, her boundless energy wears him out.

He asked her over the phone to accompany him to the school prom, where Kaydence, not Skylar, was named prom queen.  The pair began dating steadily after that.

When he visited Kaydence at university, she was showing him one of her experiments.  There, he was also abducted by aliens.  The abduction took Terry completely by surprise.  It also took Kaydence by surprise, too, because Terry had difficulty dealing with it, and his personality had changed because of it.  He was even grumpier than usual, and she had to constantly reassure him that he mattered.  Because Terry was a teenager, he couldn't get alien pregnant. 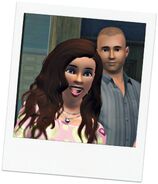 Terry and Kaydence in an undated photo. Notice his serious, stern expression next to Kaydence's happy one.

Terry appears on Christmas cards he sent with Kaydence

Retrieved from "https://sims.fandom.com/wiki/Fanon:Terry_Ho?oldid=781779"
Community content is available under CC-BY-SA unless otherwise noted.