Suki Space is the sister of Lana and John and the daughter of Quinn and Jacob. Jr. She used to be sweet and happy but after she was killed by her sister and resurrected by her grandfather, Jacob, her personality was drastically changed.

Before she was born, Suki's parents began dating after Jacob. Jr's mother died. Although people were sure that young love wouldn't last, they proved them all wrong by staying together and eventually got engaged. However, they had a shock when Quinn found out that she was pregnant! She soon had Lana and remarkably things were Ok. They graduated with honours and all seemed Ok. The soon bought a house for the family and Quinn found out that she was pregnant again.

As a baby, Suki was very sweet. Even her sister couldn't help find her adorable. However, she was a curious child who annoyed her sister by grabbing her nose a lot. Hard. Suki was one of the joys of Kylie (the other was Belle) as Lana had always been a little rude it was nice to have a sweet baby for once.

As a toddler, Suki was still very curious. Her parents bought her a lot of toys but the thing she loved most was a peg box. She nearly swallowed the pegs so her parents took it away and gave her a drawing table which meant Lana could join in and keep an eye on Suki too. Suki noticed her family seemed sad and one day, Suki saw all her toys being bundled into boxes. She didn't like this and cried but stop when Lana told her to shut up! She went on a long drive and ended up at a big log house. Suki loved it! She loved it all from the fireplace (for making marshmallows with Mummy) and the red pick up truck (for driving with Daddy). She aged up happily to a child.

As a child, Suki started at the local school and immediately made friends with many people. She was kind to most people (unless they were mean to her or her friends). She began having trouble with Lana who was lonely and in her anger would hurt Suki. Suki didn't like this so she told her parents who grounded Lana. Suki didn't care much though and just went off to play with her friends.

As a teen, Suki knew a lot about Lana. For example she knew that at exactly 12.00 PM, Lana would leave home forever to go and live in Downtown and waste her life on crime. She had to stop it. Suki faked that she was asleep that night and when she heard Lana sneak downstairs she crept after her. Lana crept into the family car unaware of Suki. Just as the car was leaving Suki jumped out in front. Lana slammed the brakes on and stopped just before. Suki told her to stop this but Lana hissed at her to get out of the way.. Suki refused and the next thing she knew, her life was ended. Suki's memory faded and everything was dark. She figured it would stay that way forever but it didn't. Her heart started beating again but not by a miracle... science. Suki woke up and for a second, she was the old Suki, but that changed a few minutes later... Suki changed a lot since her resurrection, she was no longer kind and happy but she was now bad tempered and moody. Suki hated her life from then on especially as due to the fact people had witnessed the accident and seen her die they couldn't bring her back into to the world so they kept her inside the house and never let her out. Suki hated this life but knew there was nothing she could do. The old Suki had not been particularly bright but the new Suki was. She knew to get out she would have to pretend to have changed. If she could trick her parents into thinking she was their old daughter again and not the new Suki, maybe she could trick them long enough to escape. Slowly gradually she began to 'change'. Quinn and Jacob. Jr were thrilled. She pretended to accept their comfort. One night, her parents were tired after a long day, so Suki offered to clean up downstairs and keep an eye on her brother. Her parents agreed but the moment they were out of sight, she tied up her brother and pushed him into the cellar and broke out of the house. Suki was free. 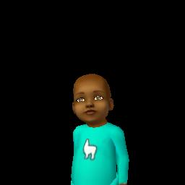 Suki Space as a Baby. 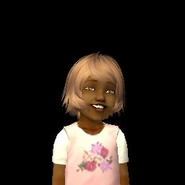 Suki Space as a Toddler. 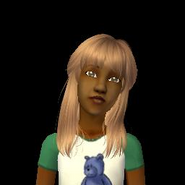 Suki Space as a Child.
Add an image to this gallery
Retrieved from "https://sims.fandom.com/wiki/Fanon:Suki_Space?oldid=627931"
Community content is available under CC-BY-SA unless otherwise noted.