Fanon article ownership
This fanon page was created and is owned by AldoHyde (talk). Unless the edit is constructive and/or minor (such as fixing a template), please do not edit this page unless given permission from the author.
StrangeTown Monty (STM)

Many Veronaville residents mysteriously die in the Veronaville Disaster, leaving Monty siblings Antonio & Bianca the only adult survivors to unravel the conspiracy. Antonio's task requires him to remain in Veronaville, while Bianca heads to Strangetown. This decision becomes easier for Bianca after discovering that her long-time crush, Kent Capp, was among the fatalities. 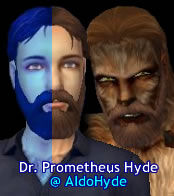 New episodes of StrangeTown Monty appear on AldoHyde's YouTube Channel approximately every 2-6 months, depending on the author's personal schedule.

The show is NOT cancelled unless the author explicitly says so on AldoHyde.com, his Main Blog, where production updates (%) are also posted.

(#) Future episodes of STM - anything AFTER 2.07(A) - will be announced EXCLUSIVELY on OTHER channels of the author's choice, most notably his blogs and YouTube Channel.

Fans may also take the STM Quiz, which contains material up to and including STM 2.06(B).