The Sims Wiki
Register
Don't have an account?
Sign In
in: Fanon created and owned by JennaLorena, Sims (fanon), Female Sims (fanon),
and 28 more

Stephanie Ionello (née Quinette) is a Sim created by JennaLorena (talk). She is playable in both The Sims 2 and The Sims 3. She is the daughter of Stephen and Olivina Quinette, and the wife of Isaac Ionello. She is also the mother of Jordan Ionello, mother-in-law of Geena Ionello, and granddaughter of Jada Ionello.

Life Leading Up to The Sims 3[]

In The Sims 3, Stephanie Ionello is living with her father and mother in Bridgeport. She is very close with both of them, and is a proud straight-A student. She is quite attractive, receiving many of her fathers features. She wears a tank top under a green top, held together by a belt, covering most of her short shorts.

Stephanie has met her future husband, Isaac, and shares a similar group of friends, being close with Elspeth Cook, Lisa King, and Bronson Littler. Although she seems to have a good head on her shoulders, her rebellious attitude is apparent through the fact that she's dating Ryan Atkins, an older man.

Life Leading Up to The Sims[]

Stephanie does not appear in The Sims, even though she is alive during that time period.

Life Leading Up to The Sims 2[]

Stephanie is just getting over the death of her husband by the time the storyline has caught up with The Sims 2. She wears a yellow blouse and blue jeans, and wears her hair in several small buns. Her eyes are green unlike in The Sims 3, where they are brown.

She is retired, and lives alone. It is revealed that she and Isaac had one son together, Jordan. Jordan is married, and his daughter, Stephanie's granddaughter, was taken away by social services. The loss of her husband and granddaughter has taken quite a toll on Stephanie. Although not friends with anyone outside of her family, she is friends with many extended Ionello relatives.

Stephanie and her parents 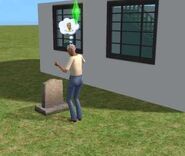 Stephanie mourning the recent death of her husband.
Community content is available under CC-BY-SA unless otherwise noted.