Fanon article ownership
This fanon page was created and is owned by ParanormalJ (talk). Unless the edit is constructive and/or minor (such as fixing a template), please do not edit this page unless given permission from the author.

Stacey Guetta arrived in University with almost no memories, she just recently came out of a coma not knowing barely anything about herself or her past life, the only thing she had was her purse with her ID card and licence so she only knew her name.

Leading up to college[edit | edit source]

Being scared and confused Stacey walked into her orientation to met some of the professors they knew what had happened to her and suggest she stay with the Besties household she agreed and met her new roommates; Cassandra Rose,Chloe Bennett and Antonio Banderas everyone was very nice to her she made great new friends. Later she met Ashley Couldrec he was very nice to her he later asked her on a date which she agreed to. He took her to clubs which she enjoyed most he later asked her to move in starting to fall over heels for him she agreed again, They later engaged.

While making spaghetti it burst into flames trapping her it later lit her on fire her motives dropped to the point were they were so low she died of starvation, Ashley made it home in time to see the fire and Staceys death. 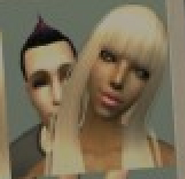 Stacey with Fricorith Tricou
Add an image to this gallery

Resurrection tip
This Sim can be brought back to life using the Resurrect-O-Nomitron, the genie lamp or an evil witch's spell. For more information, read Game guide:Bringing Sims back to life.
Retrieved from "https://sims.fandom.com/wiki/Fanon:Stacey_Guetta?oldid=682099"
Community content is available under CC-BY-SA unless otherwise noted.