Skylar Róisín Plumb Cheesman (roh-SHEEN) is currently a student at Le Fromage Art School. She was born in Hidden Springs to Andrew Cheesman, a professional soccer player, and Savannah Plumb, an author, adventurer, and archaeologist. The third daughter born to the couple, Skylar was given the middle name of Róisín as a nod to both Savannah's and Andrew's Irish heritage, as it means 'little rose.'  She is of English, French, Irish, German, and Native Simerican descent.

Skylar was the first of Savannah and Andrew's children to be born outside of Sunset Valley, and she was conceived after an impromptu romp inside of older sister Sierra's tree house.  Savannah was surprised to learn of her pregnancy and was advised to undergo bed rest due to her somewhat advanced age.  Skylar was born at Rudolph Vanderburg Medical Center in Hidden Springs.

Skylar was an unusually difficult baby.  Her cries were loud and piercing, so much so that they woke the entire household.  The family butler, Max, referred to her as a 'little diva,' and in fact almost quit over it. He would have had not older sister Sage intervened by taking the child on while Max got some rest.

With all the attention on the older children, Skylar has at times seemed lost in the shuffle.  So she created an imaginary friend companion called Fluffs, with whom she spent the majority of her time as a child.   She's proven to possess a vivid imagination, and some speculate she may even have a future in acting.

Skylar is the first of Savannah's children to show an interest in and aptitude for the Plumb family business -- music. She has expressed the desire to become a vocal legend, and her parents have encouraged her in this by enrolling her in singing lessons and Le Fromage Art School.

Skylar has become a teen and is now trying to balance the demands of normal teenhood with a burgeoning singing career. She has performed in several Simfests already and is known around town for sing-a-grams.  Skylar has said that the pop star Madison Avenue is her idol and she wants to be just like her. Indeed has shown some stylistic similarities to her in her performances so far.

Skylar was deeply impacted by the death of her maternal grandfather, Nathan. But it seems to have strengthened her resolve to carry on his musical legacy.

Skylar is currently enrolled at Le Fromage Art School, and is said to be very popular and well-liked there. Her older siblings have banded together in full support of her showbiz dreams and show no signs of resenting her.

However, she does show a deep-seeded resentment toward her cousin, Kaydence.  Skylar seems to believe that her mother, Savannah, favors her, and the girls' traits seem to bear this out.  Skylar does not possess the family Genius trait, but Kaydence does.

While at Le Fromage, she befriended a fellow student, Alanna, an aspiring actress and the daughter of director Alan Stanley and actress Emmy Starr.  The two became close because they share a similar love for shopping and coffee. 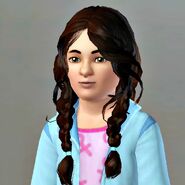 Skylar as a child.

Skylar performing at a simfest in Sunset Valley.

Skylar (left) with new friend, Alanna Starr Stanley
Add an image to this gallery
==
Retrieved from "https://sims.fandom.com/wiki/Fanon:Skylar_Cheesman?oldid=785908"
Community content is available under CC-BY-SA unless otherwise noted.