Sim-Book is a social networking site featured in The Sims 3. The website was launched on September 4th 2004 and many, many Sims signed up for it. After registering to use the site, users can create a user profile, add other users as "friends", exchange messages, post status updates and photos, share videos and receive notifications when others update their profiles. Since 2006, anyone who is at least a child was allowed to become a registered user of the website.

In 2002, Geoffrey Landgraab had an idea of making interactions between Sims more interactive than it ever was. He spent many nights creating the website, trying to perfect it from any glitches. Originally, it was only going to include a chat, username, and an avatar, but he wanted to expand from that. He soon added the features to post onto each other's profile, comment, like, add friends, and post pictures. Months before it's official release, Geoffrey released it to the Goth family, Langerak family, Bunch family, Single Moms household in Sunset Valley to test it out and get reviews on it. The reviews were positive, and after that on September 4th 2004, it was released to the public and many, many Sims signed up for it.

After 2006, Sim-book was released to other countries and Sim-Nation neighborhoods, with had it even more popular. It also came with the new features to add videos, create business pages, private chats, and add the town you live in to your page. They also lowered the age restriction from Teen to Child.

In 2010, the mobile Sim-Book app was released, and the Sims can access Sim-Book using their cell phones. This brought in many more users into their base especially youthful people. However, after the release of Simstagram in 2016 many people converted from Sim-Book to Simstagram.

The ability to find Sims you are friends with. 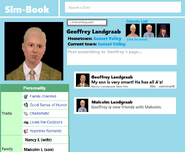