Fanon article ownership
This fanon page was created and is owned by Majo.mraz.9 (talk). Unless the edit is constructive and/or minor (such as fixing a template), please do not edit this page unless given permission from the author.

When I started game there were husband nad wife Richard Shirt and Christina Shirt with their daughter Rachel Shirt and dog Snicker Shirt . After days Rachel (as Young adult) found very good friend Charlie Shear and after 10 days they began more that best friends, they began pair and they had weeding but meavhile happened too one sad think ; Snickers began elder and he died. Rachel is owner of Rachel´s Paradise resort (named after her) and Charlie is member of music band The puppies . Charlie was alive a lot of generations after his adoptive parents died because he had unique and powerful single-serving meal Ambrosia . He ate this food every day before he began Adult, a lot of times. But when he met Rachel Shirt ,he didn´t wanted be undeadly, he just wanted to be with her. They were just friends and after many days (i think that it was about 10 days) they began pair, and they had weeding. She had secret relationship with Kevin Breese !!! Rachel wasn´t sure if she want that, but she started and it happened . Charlie found that secret reletationship and few day he did´t want just talk with Rachel. After few days he forgave Rachel because he really love her and her really love him. They moved to another house .In wither Christina began Elder and in same day Rachel began pregnant . She had two girls; Miley Shirt and Katnnis Shirt and they grew up, now they are learning their toddlers skills 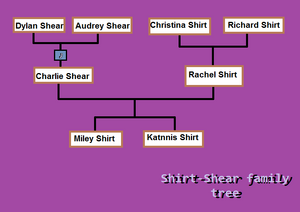 Retrieved from "https://sims.fandom.com/wiki/Fanon:Shirt_family?oldid=694753"
Community content is available under CC-BY-SA unless otherwise noted.