Fanon article ownership
This fanon page was created and is owned by MyLITTLElife (talk). Unless the edit is constructive and/or minor (such as fixing a template), please do not edit this page unless given permission from the author. 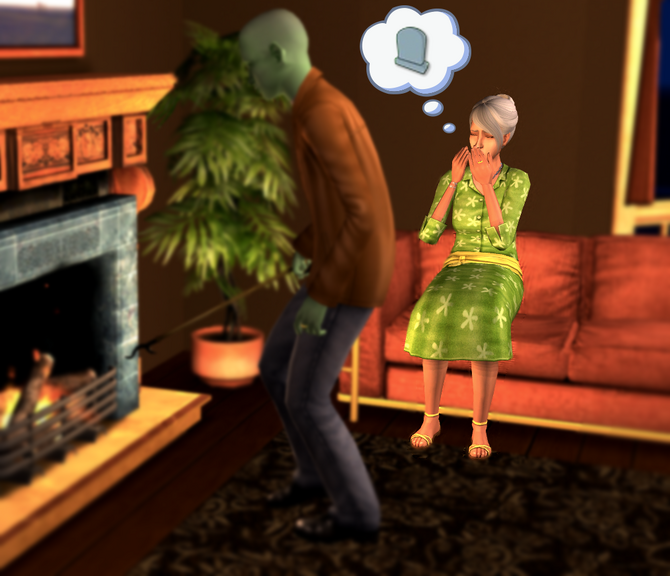 Sherrie Vagner (née Evors) is a resident of Rosewood Heights, a town created by myLITTLElife on The Sims 2: Super Collection. She is the youngest daughter of Grayson Evors and the first and only child of his second wife Daphne Evors, the wife of Emmett Vagner, the sister of Kimbra Šebesta (née Evors), Daniel Evors and Mitchell Evors, the mother of Rosalie Šebesta (née Vagner), Brandon Gladbach (né Vagner) and Mitchell Vagner, the aunt of Claudia Šebesta, Jennifer Evors and Hayley Lombardi (née Evors), the grandmother of Victoria Šebesta and Drahomíra Gladbach.

After years of trying to track down her siblings she had learnt that she only had one remaining sibling, Daniel, the middle child. Both Kimbra and Mitchell passed in their youth tragically. Sherrie was absolutely astonished to learn that her brother had no idea she existed, their father hadn't spoken to his other children in years, well more so they didn't speak to him, once they were old enough they were able to realise all the years of neglect, cutting ties was easy for them, especially since their mother was no longer among the living.

Extremely bright and talented, Sherrie was a scholar amongst her peers, she graduated Rosewood Heights High a year early and got early admission to University. Breezing through University, Sherrie graduated with a 4.0 GPA, unfortunately her parents were no longer around to see her get to this stage in her life but her brother and his family stood by her proudly. A couple years after graduating, Sherrie was offered a catering gig for work christmas function in Strangetown, it was their she met the love of her life.

Sherrie was always open minded, always keen to try new things and meet new people, in this instance she didn't think twice when an alien scientist attending the function by the name of Emmett Vagner asked her out for dinner. She had never been to Strangetown before but her colleagues had previously boasted about the cuisine there, she was overly keen to try out the local restaurants, it was a double strike for her, great food and a handsome guy.

Years later Emmett and herself married, they had a small wedding mostly consisting of family and a few friends. During this time Sherrie was obsessed with the Twilight series, when she had her first child, a girl, she named her Rosalie. Named after one of the characters in the series, of course the name thing disturbed her husband to an extent but she felt the name was fitting regardless. A few years later, Sherrie had another child, a son named Brandon. Brandon grew up to be your average guy next-door, he was sub-par in school but was quite the card, he had a great sense of humour, something Rosalie also inherited.

By this point in her life, Sherrie was becoming a great success in her field. She got offered her cooking show on one of the biggest TV stations in Sim Nation, her marriage was going perfectly, they even hired a live-in nanny, Ekaterina Reamon, a Macedonian woman, a bit hard to understand as English clearly wasn't her native language but the kids loved her, with Emmett and Sherrie having such busy careers she practically raised the kids, Emmett and Sherrie felt sorry for her because she had been living in Rosewood Heights for decades, she was an immigrant who married when she arrived but a few years after she lost her husband in a work accident. She never re-married or had kids, but in a way she kind of did, even if they weren't her own. Emmett and Sherrie insisted she move in, an offered which excited her.

Come the recent years, Rosalie had married to Joachim Šebesta, a choice which disturbed many but Rosalie insisted their love was genuine. Perhaps the timing was bad, after all, his daughter and ex-wife only perished in a house fire just 3 years ago but on the other hand, Kimbra and Joachim had been divorced for a few years before the fire. Irregardless, Sherrie wasn't very fond of the age difference between the two but she can't judge, especially since her father used to refer to aliens as "slime scum", if only her father saw her now. Her mother on the other hand was an absolute saint, a very kind loving woman. She never told her husband how she felt about him and his kids but on her last days she told Sherrie that she wishes they were apart of their lives more and that she hopes Sherrie will be able to reunite the family.

Shocked, but not so shocked when Christmas of 2012 came around, Brandon brought home a man, a very handsome man named Juliano Gladbach, a local firefighter. Brandon revealed to the family that he was in a relationship with Juliano and that they would be moving in together once he graduated University. A choice that delighted Sherrie, a choice which Emmett would have to get used to. Shortly after the Christmas season, Sherrie gave birth to a third child, a son which she decided to name after the brother she never got to meet, Mitchell.

Retrieved from "https://sims.fandom.com/wiki/Fanon:Sherrie_Vagner?oldid=797749"
Community content is available under CC-BY-SA unless otherwise noted.