Fanon article ownership
This fanon page was created and is owned by Hilgardite (talk). Unless the edit is constructive and/or minor (such as fixing a template), please do not edit this page unless given permission from the author.

Note: This page contains references to drugs, alcoholism and other sensitive content. The story of the character itself is rather sad, miserable and sombrous. Some people might feel hurt or offended reading it. Maybe You, seeing such a description of this article, got some little reflection and a voice in Your mind told You: "Hello, my Dear. We know each other very well and know how the situation looks like. I have a bit of advice that in my opinion is good to follow - what about going back to the list of fan-created Sims or even returnig this Wiki's Fanon Portal?". Well, honestly, then this voice might be right and I recommend listening to it. If You decided not to, or haven't had such a thought, then You can enter this page and read what is there written. But... it's Your own risk!

This still remains unknown. The young girl was found abandoned by some people who took her to an orphanage she frequently tried to escape as a young girl, eventually succeeding at the age of eight. Probably their parents were both alcoholics. 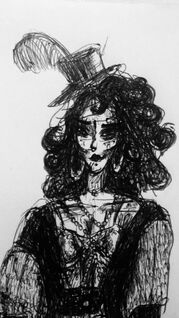 Shannie in her extravagant everyday circus suit. A sketch.
Add an image to this gallery

Retrieved from "https://sims.fandom.com/wiki/Fanon:Shannie_Lilstyl?oldid=899827"
Community content is available under CC-BY-SA unless otherwise noted.