Seth Takitani is the Ex-Boyrfriend of Nancy and the son of Ying and Yang. He lived with his grandmother, Nola until she died leaving him alone. He loved Nancy truly and can't bare that she is going to start a new life without him.

In his early life, Seth had a happy life with his parents. They were determined that he wouldn't have a life of crime and neither would they but they had to do one more heist to tie up any loose ends and this heist was the cause of their deaths. He then went to live with his Grandmother but resented it and kept running away. One day, he met Nancy Space and he told her about him and how he needed a lawyer so Nancy said she would be if just lay low and didn't commit any crimes until she graduated so Seth agreed. He kept his head low at his grandmother's house but one day, tragedy struck, his grandmother died and he ran away to Nancy's residence and stayed with her until she graduated.

As an adult, Nancy won all the allegations against Seth but this ruined her reputation. Nancy was upset that her career prospects were gone so he suggested crime. Nancy was unsure at first but she would rather die than have her family see her working in a local coffee shop as a waitress as she knew they'd be disappointed. So Nancy and Seth became robbers. Seth later proposed to Nancy and they decided after the wedding, they would stop crime for good. However to fund the wedding they needed to go for a higher prize. Thy couldn't go for the low guarded homes anymore if they wanted a wedding at all, so they would have to start going for the billionaires like the Van Bonsai Family, The Tse Family, The Redwood Family but one name came to mind, the Noel Family. They did some brief background research and found out that the picture above the fireplace was worth §90,000 by itself so the wedding would be no problem. However, they failed to find out that Billy was a powerful warlock. While they were stealing, they alerted Billy and Stella who came down. Billy told them to admit all. Billy said nothing but Nancy broke down and cried. Billy asked her if she'd like another chance at life. Nancy shook her head but her face seemed to say yes. Suddenly, Billy aimed a bright light at Nancy and she passed out. Seth dropped to Nancy side and checked her pulse. Suddenly, Billy told him that she was alive, he'd just given her another chance. Seth looked up angrily and asked him what exactly had he done to her. Billy said, erased her memories and he was giving Seth a chance to change as well. Seth said he didn't need it but Billy said he probably would need it. He was going to let him go with no charges if he let kept out of Nancy's life and let her start afresh. Seth reluctantly agreed but decided to come back for Nancy as soon as possible. He found out that Nancy was in hospital but decided to visit her late at night so her family wouldn't be there as they knew that Nancy's family knew of him and wouldn't let him in. However, Kylie, Nancy's sister was there and told him that there was no way that she was going to let him see her and if he didn't want to have the Space Family as his arch enemy, he'd better leave. Seth left as he knew that somebody would always be there to stop him. from then on, Seth stalked Nancy. One day, he followed them in the park and something happened. Nancy was nearly shot but Bruce took the bullet. Seth was jealous. He should've been the one to take it... From then on, Seth followed Nancy. He was sad that she was sad about Bruce. He should bee the one that was being mourned and in hospital. He would've died for Nancy. Bruce recovered though and he got engaged to Nancy. Nancy soon got a job in the business career hiring people. He gave himself a fake name, Ralph Bradsbury and applied for a job. He seemed to be the perfect person for the job and he was hired. Could this be his chance? It seemed everything was fine, Nancy even accepted his invite for coffee. It hurt him to see her happy with Bruce, the ring he gave her on her hand when it should have been him although this might all change if his plan worked. He leaned in to kiss her and she slapped him. She shouted at him and his mind he finally realised that the old Nancy was dead. She had died when she had had her memories erased and now this Nancy was different from the one he loved. He resigned and went back to the place he had been with Nancy a day before. One of the waitresses walked up to him and asked what was wrong. He explained and when he examined her closer, she had a similar face to Nancy, she had similar hair to her. She was almost exactly like Nancy (apart from the eyes and skin). He asked her out and she said yes. He smiled not because of her but because she was similar to the girl he loved. Seth was in love with Nancy still but until then he would have to stick with Tracey. After buying a house right near Nancy in Takemizu Village near the Kruviers, Seth planned to get Nancy back but Bruce noticed and they Kruvier family stopped going. Seth grew depressed and began abusing his, girlfriend. However, Seth felt bad as when she cried she looked just like Nancy so he stopped and decided to be nice, at least until he could get Nancy. It was years until he got the opportunity to see Nancy again and by this time him and Tracey were expecting twins. Seth heard that Nancy and Bruce were going to move to Takemizu village so he decided that his little family needed a fresh start, perhaps in Takemizu Village? 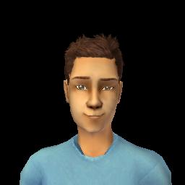 Seth Takitani as a Teen.
Add an image to this gallery
Retrieved from "https://sims.fandom.com/wiki/Fanon:Seth_Takitani?oldid=684862"
Community content is available under CC-BY-SA unless otherwise noted.