Sean Carpenter was one of the Original 8 who were abducted, altered, and had all memory from SimNation wiped clean by some unknown entity. Sean, as you can tell by his last name, was programmed to be the resident carpenter. After all, it would be cruel to assume they sit and sleep on the ground for the rest of their lives.

Mike Gardener gave birth to Sean's first son, Eric Gardener, on 4/5/1[1]. Sean then gave birth to twins, Alex and Drew Carpenter, on 4/4/1, who were sired by Dan Plummer. Then Matt Baker gave birth to his last son, Zack Baker on 1/4/2.

Sean was the first of the Original 8 to pass away on 4/4/3. He was 47 days old (as counted from his first day in the Genesis Project since he never knew how old he was before that time). He has been laid to rest in the cemetery. 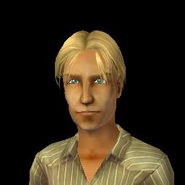 Sean as an adult 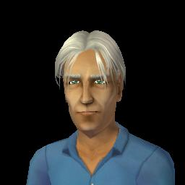 Sean as an elder

Retrieved from "https://sims.fandom.com/wiki/Fanon:Sean_Carpenter?oldid=727306"
Community content is available under CC-BY-SA unless otherwise noted.