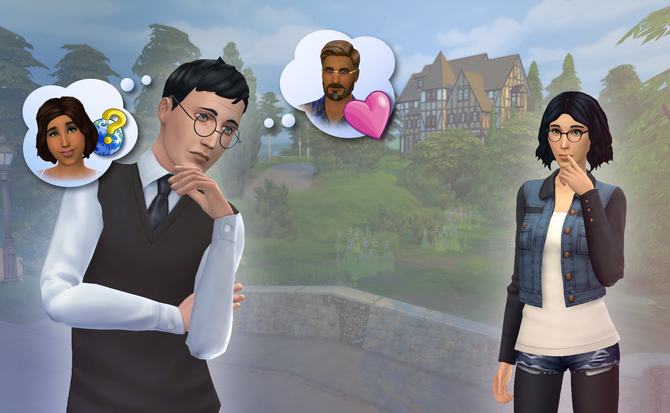 Listen  /ˈʃvaɪɡər/) is an infamous family which appears in almost every title of The Sims series. They are known as the founders of Autumn Falls and have family ties going up to medieval times. The Sims around them often consider them as spooky and peculiar.

The Schweiger family first appeared in The Sims with only five alive members, which were the married couple Satinav and Ann Schweiger with their children Raoul, Deliah and Connor. Also many deceased family members can be found in the family graveyard in the garden, but since the game did not feature a family tree function the exact relation to most of them remained unknown until The Sims 2 was released.

The Sims 2 was the second game the Schweiger family was featured in. 25 years have passed since the events of The Sims and both Ann and Satinav have died of old age. Raoul married Ida, had a child with her and aged up to an elder. Deliah and Connor became adults and Deliah married Desmond, while Connor is in a romantic relationship with Zoë.

The Sims 3 is a prequel to the events of the previous iterations and takes place roughly 40 years before the events of The Sims. Satinav is a teen and lives alone with his adult parents Abigail and Xavier. This is the first time, his parents are featured alive in a game.

The Sims 4 plays roughly around the time of The Sims, but instead in an alternate universe, where Ann did not marry Satinav. Instead he married Lucy Applerose, who later died of embarrassment. But before they had a child together. That child is Cornelia Schweiger and she lives now with Satinav in the Schweiger Summer Residence in Windenburg.

The Schweiger family has a long history and their origin dates back to the ancient medieval times. Back then they were known by the medieval equivalent of their surname "von Swaiger".

The first Sim bearing that last name was a smith's son. His name was Brennan and he was one of a few villagers, who fled from an unjust king. The king ruled without mercy, abusing his power. Worn-out by his reign of terror Brennan persuaded the Sims around him not to rebel, that would have been an unwise decision, but to leave this kingdom and travel to a far away land to found their own.

One of these Sims was Mallory, a librarian's daughter who was in a romantic relationship with a local witch. She loved her dearly, but this wouldn't last for long, because she had an affair with Brennan and when he wanted to leave, she had to make a choice between him or her. In the end she chose him, leaving a devastated witch behind.

Later Brennan and Mallory were appointed the leaders of the small village of Autumn Falls. Autumn Falls soon became a town and eventually became a kingdom, which made them king and queen.

In The Sims,The Sims 2 and The Sims 3 there is an art gallery in honor of Frida Schweiger, who is, along with her husband, the oldest Sim still appearing in the family tree of the Schweigers[TS2][TS3][TS4]. Her urn is currently located in a secret room of said art gallery. One says that a ghost of a starved, pale woman appears once in a while at night, where she tries to paint, but no color appears on the canvas.

Schweiger: Jewish-German nickname for a somewhat taciturn or 'deep' person. From the German word 'schweigen' meaning 'to be silent'.
Mallory: 'Unfortunate' or 'ill-fated' in French.
Brannon: An Anglicised Gaelic name meaning 'sorrow' or 'sadness'.
Vanitas: Latin name that means 'emptiness'.
Frieda: Germanic name, orginally a feminine short form of names with 'frid' in it, meaning 'peace'.
Velvela: Feminine form of 'Velvel', meaning 'wolf' in Yiddish.
Samuel: From the Hebrew name 'שְׁמוּאֵל' (Shemu'el) which could mean either "name of God" or "God has heard".
Dorothy: English form of 'Dorothea', meaning 'gift of God'.
Kravitz: Jewish name meaning 'tailor' from Polish 'krawiec'.
Abigail: From the Hebrew name 'אֲבִיגָיִל' ('Avigayil) meaning 'my father is joy'.
Xavier: Derived from the Basque place name Etxeberria meaning 'the new house'.
Eve: From the Hebrew name 'חַוָּה' (Chawwah), meaning 'to breathe' or 'to live'.
Satinav: The name 'Vanitas' spelled backwards. Also the Divine of Time in the role-playing game 'The Dark Eye'.
Ann: 'Ann' is a form of the Latin female given name 'Anna'. This in turn is a representation of the Hebrew 'Hannah' or 'Hanani', meaning 'He has favoured me', the name of the mother of the prophet Samuel.
Raoul: 'Raoul' means something like 'mentor' or 'adviser'. Raul comes from the Germanic name Rad-Wulf and means 'mentor of warrior'.
Deliah: Means 'the one with the billowing hair' and 'the secondborn'.
Connor: 'Strong willed', 'wise' or 'Hound-lover', also from the Irish 'Coachuhhar', meaning 'high desire'. 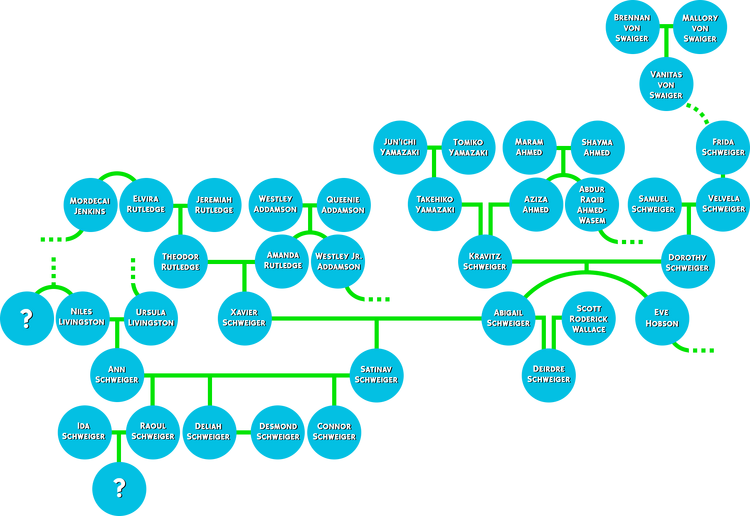 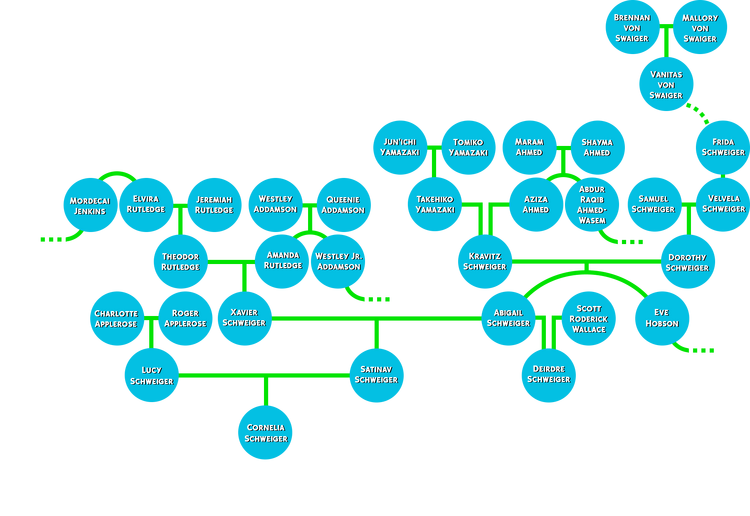 The Schweiger's family picture in The Sims 4's Story Mode, featuring Satinav and Cornelia Schweiger in the foreground, while Ann - as a young adult - and a Mystery Sim are pictured in thought bubbles.

The Schweiger family as they originally appeared in The Sims. It's seems like that they had a maid at the time.

Connor Schweiger with his new family.

The alternate Schweiger family how they appear in The Sims 4. The only family members that are alive: Satinav and his daughter Cornelia. 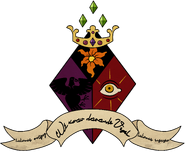 The family crest of the Schweiger family.

The old page cover.
Add an image to this gallery

Retrieved from "https://sims.fandom.com/wiki/Fanon:Schweiger_family?oldid=831282"
Community content is available under CC-BY-SA unless otherwise noted.