Scats McDooglewurtz moved into 46 Bard Boulevard, Veronaville, seeking a pleasant life in the country, which is what he received. At a restaurant, he met Sandy Bruty. The two quickly became friends and later married. They had twins, David and Donald. David moved into his own home when he grew up. Scats helped raise Donald's children, Dylan and Daphne, but passed away of old age when they became toddlers.

Scats was passionate about Arts and Crafts, mastering the Creativity skill. He had a steady job as a Criminal, but was demoted twice. Scats retired late in his life. 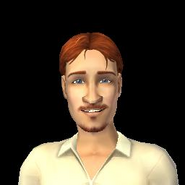 Scats as an adult

Scats eating dinner with wife and sons
Add an image to this gallery
Retrieved from "https://sims.fandom.com/wiki/Fanon:Scats_McDooglewurtz?oldid=742436"
Community content is available under CC-BY-SA unless otherwise noted.