Featured Fanon
This fanon was a Featured Fanon in June 2011. Its layout and content is an example of excellence in the Fanon Namespace.

Sarah Peasant is a young adult character created by RoseGui, who lived her life, jumping between Sunset Valley, where she was born, and Al Simhara, town she would fall in love with.

Always with the best interests of the opressed in mind and a social justice warrior, Sarah can be as good as she can be arrogant and vain. She is prepared to risk her life at every moment to be praised by others, but will that lead to her downfall?

Life Leading up to The Sims 3[edit | edit source]

Sarah was born and lived her life in Sunset Valley, the neighborhood featured in The Sims 3. Her last name, Peasant, hints to the fact that she has the Green Thumb trait. Sarah was a journalist during her life, but in fact, her natural passion was not writing, though she learned how to love it.

Sarah began with little money, so she had to live in a small and not too expensive house, she chose to live next door to Alvi family, and she got along with them immediately. She loved Sunset Valley, it was full of life and good people. Although, she had to start gaining money as she was having debt problems, and the repo-women, Amanda Gerstein, had already come twice. She began to train her writing skill, which was not a passion of her, but she soon learned how to love it, and it became one of her passions, and also started gardening a lot, but her courtyard was too small to develop many tons of plants. She was desperate for a job, but when she met the Altos, everything changed, Nick Alto, the powerful greedy business man was surprised by her writing talent, he was the owner of Business building, where Journalists also work, he gave her the job of Spell-checker, and the two became best friends. She soon met Vita Alto, and they became friends, Vita Alto was enchanted by Sarah's skills and lovely personality, though Sarah had the Good trait, which was for Vita, a fatal flaw. Sarah trained her writing skill, until she perfected it, she was already at top of Journalism career, with many friends, including: Cycl0n3 Sw0rd, Victoria Andrews, Beau Andrews, who once tried to flirt with her but got denied because Sarah couldn't destroy his marriage with Victoria, who was her best friend.

Although, her life was perfect, she missed adventure, considering she had the Adventurous trait. Sarah planned to travel to Al Simhara. She talked to all her friends about her journey, they said they would miss her. Victoria even cried afraid Sarah would never come back. Sarah, went to Al Simhara, she was very happy. She met the city, she visited many places, beautiful ones, she got caught many times, was almost burnt to death and was caught by a mummy but thankfully ran away, she even slept in a sarcophagus. She also met many new people, who taught her to sing their popular songs, which she had never heard about. Her best friend in Al Simhara, was Aisha Lufti, a very childish woman, Sarah had never met such playful woman, in her point, adults were too serious and cautious, but Aisha was not like that. For Sarah, Aisha was a very nice woman too, and Aisha praised Sarah many times, and taught her many popular songs. One day, Sarah decided she wanted romance. Sarah became friends with two boys, one, who appeared to be a Don Juan, and another, more down-to-earth, and she was involved with the two, they were her first romantic interests. She ended up dating, the more down-to-earth, Abdul Kamel. However, she liked Youssef Nagi more to go on adventure to tombs, as he was more adventurous. By this time, Sarah was very happy.

When she returned to Sunset Valley she was even more popular, one of her most popular actions was when she wrote harsh reviews to fast-food restaurants, secretly taking shots to their methods of preparing the food, and how they did propagate unhealthy habits among Sunset Valley's citizens, she was accused of being a spy, she ruined the fast food business because she wanted to fight for Sunset Valley benefit, consequently, she was kidnapped, and never seen again, Sunset Valley cried her death, and today she is their legend, the suspects of kidnapping her were Jared Frio and Emma Hatch, they were insulted and rejected by Sunset Valley's citizens, although their involvement in her disappearance was not proved. 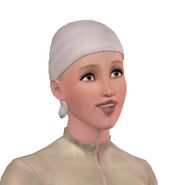 Life Leading up to The Sims 2[edit | edit source]

Peasant - Peasant, the definitions are "rustic," "uncultured person" or "person who works on a poor land."

Retrieved from "https://sims.fandom.com/wiki/Fanon:Sarah_Peasant?oldid=881293"
Community content is available under CC-BY-SA unless otherwise noted.