Fanon article ownership
This fanon page was created and is owned by AllThingsCombined (talk). Unless the edit is constructive and/or minor (such as fixing a template), please do not edit this page unless given permission from the author.

Sarah grew up on the wealthy side of Sunset Valley, next door to the Landgraab family and the Alto family in a gigantic manor that was bigger than both of the neighbors houses combined. Her parents, who were scared of pressure during school, sent her to the School of Peace and Love in Hidden Springs. Those years were the happiest for her in Hidden Springs and she loved the school and the town in general. She first arrived on campus at the young age of 8 and quickly made many friends with everybody around her; that is probably where she got her "Social Butterfly" Trait. At the age of 10, and her 2nd year attending the Boarding School she was friends with almost everybody in town. But after the 3 semester started of that year, her mother flew out to Hidden Springs to announce that Sarah's father was running for mayor of Sunset Valley and that Harold had requested Sarah come back with her mother to see the campaign. Although Mary Ann promised that Sarah would be back to Hidden Springs after the election, but Sarah wouldn't return to the town for another 20 years.

After Sarah returned with Mary Ann to Sunset Valley, Sarah immediately jumped on the campaign trail with her parents. Sarah and her mother were almost always seen at events held around the town to help her father win the election. It was announced that her father, Harold had won the election and he had chosen his worse enemy Nick Alto (chosen for political reasons) as his Lieutenant Mayor. Harold held his victory speech on the steps of the Town Hall with Sarah and Mary Ann present; along with the entire Alto family. But during the speech, a man appeared from the crowd and shot Harold twice in the chest and ran off without being caught. It is thought that the gunman worked for either the Alto, Landgraab, or Goth family so that Alto could get into power. Harold laid on the steps of the building as chaos erupted in the crowd as the crowd dispersed, the Secret Sim Service pulled the Alto's, Sarah and Mary Ann away from the scene. This event permanently scared Sarah as she watched her father get shot and bleed out right in front of her before she was evacuated from the scene. Her father was moved to the Scared Spleen Memorial Hospital where he later died of his gun wounds and it was officially announced by the Chief-of-Police that Harold was assassinated and that Nick Alto would be taking power. There was a huge funeral march for Harold, with Sarah and Mary Ann leading the casket. After the funeral, Marry Ann told Sarah that she wouldn't be going back to Hidden Springs and would be staying with her in Sunset Valley.

After the death of her father, Mary Ann wouldn't let Sarah out of the house; wouldn't even let her friends drop by. Her mother became paranoid that she or her daughter would be targeted by an assassin to make sure that there could be no way Mary Ann or Sarah could climb the political latter. To further this paranoia, she moved the family out of the mansion and sold it to the Alto's daughter. Mary Ann moved the family to a secluded house in the poorer part of town to make sure that the Alto's couldn't find them there. Mary Ann began to home school Sarah the best that she could but more problems arose when Mary Ann became addicted to alcohol and would stay at the local bar all night long, leaving Sarah locked in her room with the windows shut and locked. Fast-forward 7 years later, Mary Ann wasted the entire family fortune on alcohol gambling, still leaving her now teenage daughter alone at home in the dark. Sarah hadn't communicated with anybody but her mother for the past 8 years and the only thing that would keep her company was the book and doll that she had in her room. Every night since her mother had began to drink she could hear her mother stumble back into the house drunk; resulting in her collapsing to the floor forcing Sarah to drag her mother to bed, or her drunk mother and lover stumble in and spend the rest of the night in Mary Ann's bedroom. At the age of 18 Sarah had enough! After her mother had returned home from another night at the bar, Sarah forced her way out of her room and began yelling at her drunk mother to let her into public life one more. Her mother refused and attempted to hit Sarah with a beer bottle. A fight between the 2 broke out, resulting in Sarah knocking out her mother and leaving her in her bedroom, taking the rest of the money (which was only about 2,000 sim money) and marching out the door and into town. The first place Sarah went was the Alto's manor, as that place she grew up in. Immediately being greeted in by Vita Alto, she was able to stay in the Alto's old daughter's room until she was healthy once more. Nick Alto severely disagreed with Sarah staying in the house and decided to fly her out to Hidden Springs. Sarah had mixed feelings about this, as she still loved her mother (no matter what she had done to her as a child and teenager), but felt happy to go back to the town she once knew and loved as a child when she attended the School for Peace and Love when her father was still alive. Vita gave Sarah 2,000 more simoliones to pay for a house when she got to Hidden Springs.

Sarah was able to purchase a small home on the poorer side of town of Hidden Springs with the money that Vita had given her, along with the money that she had stolen from her mother. She began to look for her old friends around the town, but realized that it was filled with all new people, and she knew nobody in the town. She had none of their phone numbers and or new addresses so Sarah was forced to start over. She began taking jobs cleaning houses around the town for the wealthy sims of the town, including a relative of the Alto's, Bert Alto. While walking on the main streets of Hidden Springs, she ran into a man named Luke Coll. They instantly became close friends, and Luke was able to get Sarah a job as a self-employed painter; which was able to stabilize her household funds. Luke was very popular around the town and was invited to many parties, and invited Sarah to almost everyone.

About 2 years after Sarah had first moved to Hidden Springs and met Luke, she and him began to date. They became a very big "power-couple" around the town; and look began to consider running for political office. Sarah desperately didn't want him to run for office, as she thought that her childhood would repeat itself; but she never came to tell Luke not to run. Fast forward a year after that, Sarah Georgia became Sarah Coll. Luke's political career just started to take off as at the time they married he was on the city council. After they married, Sarah finally brought herself to tell Luke why she had such thoughts against Luke running for office. Luke understood, and revealed to Sarah that his childhood was somewhat similar to her's and that not to worry about his life. Sarah reluctantly agreed and let her husband continue his political career.

She desperately wanted children of her own, but Luke and her agreed not to have children until they were financially stable to move to a bigger home with much more space. It wasn't even 2 month's after Luke became the Mayor of Hidden Springs he discovered a Genie's lamp at a political event. After discovering the genie, Sarah and Luke wished for wealth and about 100,000 simoliones in wealth. Finally! There financial problem was solved, and about 1 week after they achieved their wealth, Sarah announced that she was pregnant with their first child. She was the most happy she could be and soon they welcomed their first child, a sweet little boy named Sebastian to the family. Soon after he was born they moved to a bigger house with more space and bedrooms. About a year after Sebastian was born, Luke won the governorship of the Simnation.

Now, Luke has been promoted to Vice-President of the SimNation and that he is looking to be Leader of the Free World. Sebastion is now a toddler and has learned all the skills he needs to grow up very succssesful and Sarah has given birth to another baby boy, named Erin. 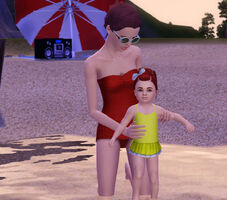 Mary Ann teaching Sarah how to swim as a child 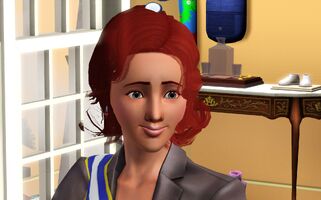 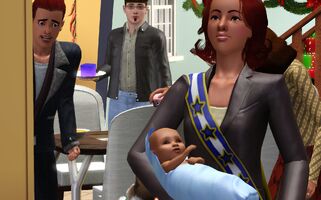 Sarah holding their first child during his birthday. 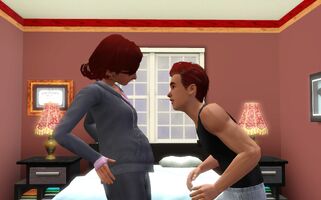 Retrieved from "https://sims.fandom.com/wiki/Fanon:Sarah_Coll?oldid=724812"
Community content is available under CC-BY-SA unless otherwise noted.