Sarah Beaker (née Curious) is the daughter of Nikto Curious and River Curious Remarkable is that while one of her fathers is an alien she didn't inheritate his green skin, what is kind unusual because the alien genes are normally dominant.

When River discovers that he is pregnant Nikto is shocked, he looks more like his alien father than he thought. River doesn't mind and loves the idea of something growing inside him. Nikto realises his life is looking much like his father's and his forever during engagement with Nervous Subject so he suggest that he and River should marry (or get a Joined Union).

Sarah's baby years were peaceful, she was an easy baby and spends most of her time sleeping.

When Sarah turned into a toddler Nikto was sick of changing one more diaper so he taught her her first toddler skill; potty training. Immediately after that River taught her how to talk and Nikto taught her again how to walk. Just a few days before her birthday her grandfather Pascal Curious died of old age.

Being a child Sarah befriends her father Nikto and he is very active in transferring his knowledge onto his daughter, what results in an A+ at school. She always looked for the quiet places in the household as her uncle, aunt, cousin and her grandfather's brothers Lazlo and Vidcund visit them most of the time. At this time she befriends Drew and feels compassion for him, because of the big dislike his father has for him.

Growing into a teen Sarah chooses the family aspiration, because of the love she got from both of her parents. She gets accepted in to private school together with her second cousins Lucas Curious and Joshua Curious.

Just a few days before her father (Nikto) turns into an elder, River gives birth to her brother Kade Curious the first alien-looking Sim in the third Curious generation.

In the mean time she meets Glenn Loner, the much younger brother of Marsha. They start dating but Marsha isn't really happy about the two being so close. When the two share their first kiss and even go steady together Marsha can't do anything but just to deal with it.

Sarah neglects her relationship a little when she turns into an adult and develops a small crush on Jenson Beaker (son of Loki and Circe). Again is Marsha not happy, but now because Sarah is cheating on her little brother, although they didn't talk to each other in ages. But Marsha is getting older and tired so she decides to leave everything up to Sarah and leave both her brother and Sarah alone with her comments.

For a while Sarah leaves her love life for what it is and starts a career in the show business. She earns several promotions but can't get Jenson out of her head. They reunite and Sarah gets the desire to settle down and waits for Jenson to propose, but she isn't sure if Jenson is feeling the same. She is happy for Lucas when she hears he got engaged but is jealous that she is still waiting for Jenson. She decides to be the bigger person and asks Jenson to move in with her.

Finally Jenson gets the hint and he proposes to Sarah. She is very excited and starts planning a huge wedding. Her cousin Drew is surprised that everyone is settling down while he's the oldest one and still single. He proposes to the maid Genesis Lam and oddly she accepts, she moves into the household just a few days before the wedding of Sarah and Jenson.

The wedding turned out to be a great succes, as all the guests had a great time. Just a day later (after the weddingnight!) Sarah discovers that she is pregnant and she couldn't be happier! She stops working and a few days later she gives birth to a baby boy namend Lars, a name referring to the Scandinavian roots of Jenson and his family.

She taught Lars a nursery rhyme and how to walk, she got several promotions and got Lars into private school. She stays close to her brother Kade during his college years and after his marriage the birth of his twin boys Yah and Matteo. Sarah is extremely sad when both her fathers die, but finds comfort by her husband and son.

When Lars turns into an adult and Jenson an elder Sarah and Jenson move out together with the other third generation elders to give their children space to create a family on their own. Sarah is happy to hear that Lars found a girlfriend and got excited when she heard that it was his fiancée as well. Not much later she becomes a grandmother of a cute boy Lotus. She adores the little guy and spoils him a lot. The death of her husband Jenson saddens her, but she expected it as they were both old and had a full life. Not long after Jenson's death her health decreases and with pain in her heart she leaves her son and grandson, she dies of old age. 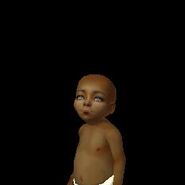 Sarah as a baby. 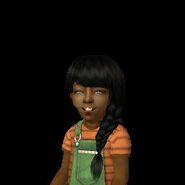 Sarah as a toddler. 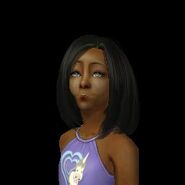 Sarah as a child. 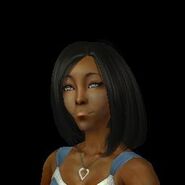 Sarah as a teen. 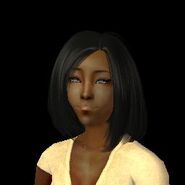 Sarah as an adult. 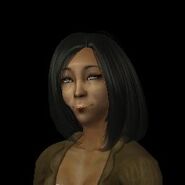 Sarah as an elder.
Add an image to this gallery
Retrieved from "https://sims.fandom.com/wiki/Fanon:Sarah_Beaker?oldid=743020"
Community content is available under CC-BY-SA unless otherwise noted.