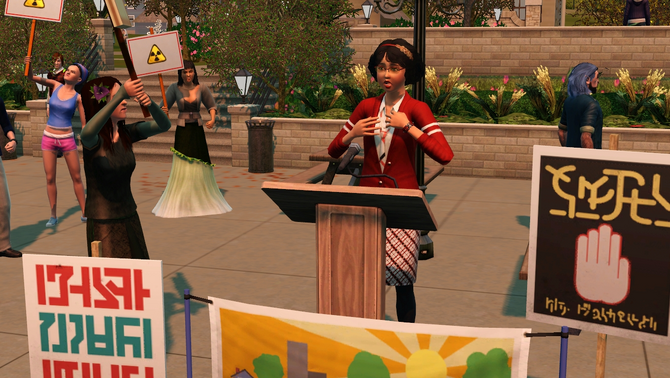 Secretive and (highly) introverted, Sapphira Syun Ling Kwok went under several names to avoid attention. In SimNation, she uses "Julienne", the surname of her mother to go well wih other Sims and they will not find a hard time pronouncing her name. No matter how hard she tries, it seems that it doesn't work.

Fanon article ownership
This fanon page was created and is owned by Gourd Roger (talk). Unless the edit is constructive and/or minor (such as fixing a template), please do not edit this page unless given permission from the author.

Sapphira Julienne (born April 26, 1987) is a French street artist and musician created by Gourd Roger. She appears in The Sims 3 though the World Adventures expansion pack.

Sapphira was born with the full name of Sapphira Syun Ling Kwok in Champs Les Sims as the only child of Ling Wong Kwok, a Malaysian Chinese architectural designer, and Elise Julienne, a French district superintendent. After the death of her parents, she grew up alone in Isla Paradiso. She graduated with a Fine Arts degree and entered the music industry where she gained a modest amount of exposure, being a two-star celebrity.

During her college years, she was also a level 10 Rebel and level 3 Nerd. Her refusal to engage in Jock activities allowed her to become a central figure between the dispute between her group, the (Name TBA), and Ye Gangnam's Tri-Fuhm Sorority household.

She is known to be introverted yet she does not act girly at all.

Sapphira generally inherited her father's Asian traits, although she inherited her mother's blue eyes which is the reason why she was named as such (being a form of the name Sapphire referring to the blue-colored gem). She has a small, high-pitched voice just like the other major female Young Adult characters in the Gourd Roger fanfictions. She has medium-length black hair that passes the shoulders, and she has a light Asian skin that is closer to Korean than Chinese.

Her Malay ethnic background makes her appearance quite indistinguishable from her partner Anthony to the point that the latter even spoke Filipino to her when they first met. Also, because of her parents' backgrounds, she also spoke with a British English-sounding accent of Simlish which started to disappear during her years in Isla Paradiso.

Her signature outfit consists of a collared shirt (usually long-sleeved), knee-length skirt, styled leggings and various forms of closed shoes so her leggings will not look awkward. She frequently uses the Create a Style to modify her clothing so she does not need to pick another clothes. She also wears glasses when wearing outfits outside of the house. She also had a geometric text tattoo on her right forearm that she got during her early Young Adult years. It was removed and replaced by an another one at the lower back in order not to be seen by college people, especially the older ones in the community.

Retrieved from "https://sims.fandom.com/wiki/Fanon:Sapphira_Julienne?oldid=809078"
Community content is available under CC-BY-SA unless otherwise noted.