If I am to be judged by the plumbbob above my head then let it control my every movement. A Saint is forever loyal but never too truthful; a Saint will never marry of a Goth, Landgraab, Bloom or the missing branch because of their priorities; a Saint must always keep up appearances to the public as PERFECT Sims they are.

If a Saint is however shaming the name, then they shall be punished with their ears mounted on a wall.

We are the second branch; no one shall help us.

The Saints were created after I first got the Sims 2 Double Deluxe. I was sick and tired of the Goths because they were too popular, so I made an opposite family called the Saints. The Saints are notorious for being the Goths' rivals and being described as the "Perfect" family in the series. The family actually is a bunch of lies, and more so have plenty of secrets along with them.

The Saint women are the only ones who are not aggressive towards their rivals except Mary, who is evil after all. Nadia is the only shy Saint and is the only passive-aggressive one besides Katherine who may be a Sim with a second personality. Saint women are known to have had the control over the family's actions while the men control finances.

The family come all the way back from when Admiral Landgraab first discovered the people of Twikkii Island. The Twikki Island residents were already separated into groups and spread into different tribes around the world but the Saints are said to have been originated from an island far out from Barnacle Bay, that the island itself sank under.

The Goths and Saints are known in a short story passed on from generation to generation in the these two families. It maybe the cause of their unknown feuding.

Throughout the history of the Saints, some are known to mix with the paranormal but to the point most with make their selves "normal". The main branch appear in all three games with some-what-to-little background stories in consoles.

Luke: is from Lucania but its actually Greek. Its basically a name I gave him because most of the men in the Saint family have biblical names.

Mary: means "Bitter" in Hebrew. It also means something else but I went with bitter...because she is.

Jodie: really doesn't have a meaning....

Pearl: A bead or pearl...yeah. Originated from English.

Ruby: A gemstone, originated from English.

Nana: refers to a grandmother.

Angel: means a messenger of God in Greek.

Victor: "Winner or Conqueror" in Latin.

Needs to be redone. 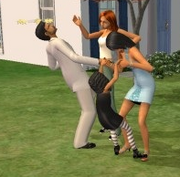 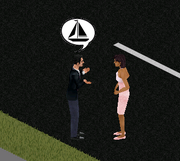 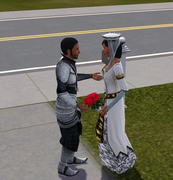 Retrieved from "https://sims.fandom.com/wiki/Fanon:Saint_family?oldid=889833"
Community content is available under CC-BY-SA unless otherwise noted.