Safron Simdow was created by Starmoonie. Safron died of old age and was an old retired fisherman.

Safron believes in being kind to others and having a sweet lifestyle. He lived in a mobile home with his wife and kids but he was happy to have nothing than something. He fished and sold his profit to the nearby market for a good amount of money. He joked around with other fishermen and taught his girls to love men for love not money. He didn't suspect Rachel would marry Abraham to get revenge on them.

Safron died after years of taking care of his family well. He didn't have much a background but was a sweet old gentleman. He didn't like the fact his daughters married rich men but he knew in his heart they were happy, and he was proud they didn't end up worthless like him.

He was a poor man with no money to afford a wedding ring for his wife but Andrea didn't care, she loved him and promised what ever came their way they will solve it together. As soon as Rachel was born, Safron finally got a home in Riverview and raised in the tiny mobile home. Rachel was proud to have such loving parents and then Janie was born after she turned 7. Janie too was proud of her folks but she ended up being more dependent on them than Rachel ever was.

Safron told his daughters he never wanted to become rich but to stay poor with a loving family than a family who argued about money all the time. This made Rachel question the future and soon enough married Abraham fearing she would never have a stable lifestyle. Safron yelled and fought with her to not stay with him but she refuse to listen to his words and now was stuck with a rich power Saint on his shoulders.

Safron died in his home with his wife and was buried behind the Saint home next to his wife far away from house. 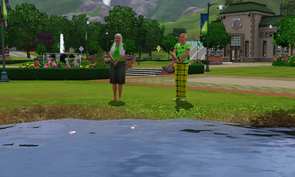 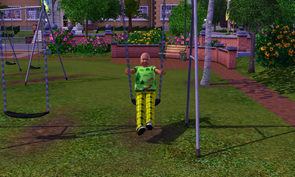 Life is SWEET!
Add an image to this gallery

Retrieved from "https://sims.fandom.com/wiki/Fanon:Safron_Simdow?oldid=627579"
Community content is available under CC-BY-SA unless otherwise noted.