Fanon article ownership
This fanon page was created and is owned by LuckyKat1 (talk). Unless the edit is constructive and/or minor (such as fixing a template), please do not edit this page unless given permission from the author.

Marty and Ross both grew up well from both lifestages, being taught all their life skills and being thoroughly cared for.

The twins were very naughty at school, always ending up in detention, yet always together. Despite this, they earned Bs and Cs, which were higher than Jess's grades at this age. One day, the twins had got seats to a free game at the sports center, and when the got home, there was a surprise waiting. Jill was pregnant!

The boys weren't thrilled. Like Jess, they groaned and got their homework out. When their mother became visibly pregnant, the boys had As each. However, they were there at the birth, and were freaking out! They might've just been there for the birth though, as they headed for the trampoline once she had given birth to Maddy! As beforethey had As, somehow they started to earn their way onto the honor roll! Their parents were very pleased, as before they rarely got home on time to detention! The boys decided togethor then on the first day on the honor roll, that they would both become Genius, and then go on to become Creature-Robot Crossbreeders. 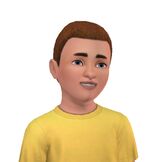 Ross as a child
Add an image to this gallery
Retrieved from "https://sims.fandom.com/wiki/Fanon:Ross_Osbourne?oldid=673665"
Community content is available under CC-BY-SA unless otherwise noted.