Rochester Goth is the son of the late Olivia and Samuel Goth, cousin of Frida and Gunther Goth. He was born a ghost, when Olivia managed to conceive unexpectedly after her death.

Rochester saw very little past his nursery. All he had as a constant companion was his fairy creepy bear, Fae. Sometimes his father or his cousin would tend to him, Whether that was just a diaper change, a bottle, or even a cuddle, they would make sure he was one happy baby. He never saw his mother, it was as if she couldn't stand to be near him. Sometimes the family servant, Bonehilda would come to his nursery and play with him, when she took a break from her chores.

Not much changed for Rochester, except for a new visitor to his nursery, a beautiful fairy all in pink. He didn't understand a word she said, until she taught him to talk. All other teachings such as potty and walking were taught by his father. He is very close to both Bonehilda and Sugar the fairy, because they take care of him. Sometimes Samuel stops by, when he isn't rattling around the old house talking to himself.

Rochester proved to be something of a prodigy at playing the guitar. Not that he had much time to play it. He had announced to his parents that one day he will marry Sugar the fairy. They laughed it off as puppy love, but he was dead serious.

He would use the magical stone in Frida's room, that could turn things into gold, to win Sugar's heart. 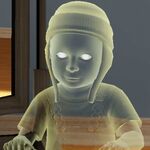 Toddler
Add an image to this gallery

Retrieved from "https://sims.fandom.com/wiki/Fanon:Rochester_Goth?oldid=627557"
Community content is available under CC-BY-SA unless otherwise noted.