Fanon article ownership
This fanon page was created and is owned by MarvinPowell (talk). Unless the edit is constructive and/or minor (such as fixing a template), please do not edit this page unless given permission from the author.

Rob Garner is a Sim living in Moonlight Bay. He is an Evil Genius and aspiring Evil Overlord and lives at 10 Haskins Way in Moonlight Bay alongside his fiancé Sofi Nelson, their young son, Melvin, and his surrogate sister, Edna Edison.

Robert is part of the famous Garner family, a group of high-powered entertainment moguls. Rob was always considered to be the black sheep of his family and resents them for it. He is deeply jealous of his Good, artistic, daredevil, snobby action movie-star sister, Jessica, and pretty much hates his whole family. That is why he decided to run away to Moonlight Bay and live with a friend of his cousin's, Gunter Pinkerton. While Gunter didn't like the offer, at first, his cowardly ways gave in to Rob's evil intimidation tactics. While living with Gunter, Rob developed a sibling-ly relationship with Edna Edison and considered her to be the cool big sister he never had with his own real life sister, Jessica.

While living in Moonlight Bay, Rob met the equally evil and mean spirited Sofi Nelson. While at first, he found her pretty ugly (and kinda still does), he quickly fell for her personality, mean-spirited pranks, and apathetic attitude towards other Sims. The two fell for each other hard and spent most of high school dating. Upon graduation, the two got engaged. As Edna spent half of her young adulthood sleeping her way through Med School and the Medical profession, Rob spent most of his teenage days exercising and practicing theft, preparing for the day he could enter the Criminal career and work his way up to one day being the Master of All Things Evil. Meanwhile, Sofi spent most of her time in high school beating up and tormenting her sister's boyfriend, Gary Gellar, jealous at him and Rita Nelson's relationship until Rob came along.

During their young adulthood, Rob quickly worked his way up the Criminal career, as did Sofi, going deep undercover as a mole in the Law Enforcement career. (Though she was a pretty corrupt and obviously immoral Patrol Officer.) By the time Edna somehow got to Level 10 in the Medical career and Gunter became bored with Professional Sports, having mastered the game and becoming complacent, Sofi got pregnant and Gunter became engaged with his newest girlfriend, firefighter Keahi Bryne. It was then decided that Gunter and Keahi would be moving to Hawaii, and Rob and Edna would be moving out of his place. Sofi soon gave birth to a sloppy, introverted young baby boy named Melvin and he, Edna, Sofi, and Rita Nelson all moved into the large home on 10 Haskins Way in Moonlight Bay to begin the new chapter of their lives. Adding more joy to his life, this happened all at the same time he found out his action-star big sister, Jessica, had a Midlife Crisis, divorced her husband Chad Witt, and checked into rehab, all in the same week.

Rob has a level 9 in Charisma, a level 9 in Logic (being an evil genius, and all), a level 8 in Athletics, a level 5 in Handiness, and a level 3 in Cooking.

Rob Garner as a teenager. 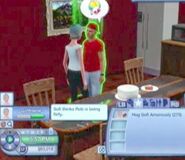 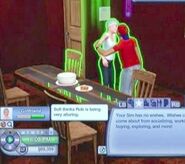 Rob kisses Sofi at the party. 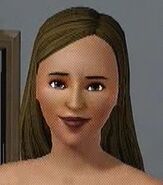 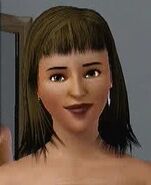 Rob's fiancé, Sofi Nelson.
Add an image to this gallery
Retrieved from "https://sims.fandom.com/wiki/Fanon:Rob_Garner?oldid=627555"
Community content is available under CC-BY-SA unless otherwise noted.