Riley Curious is the illegitimate daughter of Harper Curious and Buzz jr. Grunt. She is named after her grandmother whose maiden name was Riley. She has two halfbrothers of her father's side: Ray and Hayden Grunt.

Buzz junior is the son of Tank and Stella Grunt. He grew up indoors, as his father was a strict soldier and his mother was afraid that he and herself wouldn't be accepted in the neighborhood. Little did she know that Strangetown was full of aliens like herself. Tank never told her as his father was against them. If the neighborhood would find out about his marriage he would put his family name to shame. With the death of his parents Buzz jr. was a little puzzled, nobody told him what he had to do now.

Harper always had a good and comfortable life, surrounded with loving familymembers. Harper enjoys life and literally calls the whole neighborhood to make some small talk. She loves men, but shows this in a sort of classy way. With the death of her parents, and the discovery of her real father a lot changed for Harper. She felt like it was time to grow up now.

The two met in town, and as usual Harper stopped to talk to Buzz, he was an attractive man she never met. The two became friends and had a lot of fun together and in the end they even became lovers. Harper wasn't the girl that stayed with a man for a long time, but Buzz had never experienced this before. When Harper broke up with Buzz he was crushed. But Harper discovered she was pregnant and she was terrified! She didn't know what to do, so she decided to do nothing.

When the baby was born it was obvious who the father was. Baby Riley had green skin and strangely enough deep black eyes, something even her father didn't have. Harper didn't want to be like her mother, so she decided to go to Buzz and tell him about his daughter. There she discovered that Buzz during Harper's pregnancy got married to Delaine, daughter of James and Kana Smith and now she was about to give birth to their first son Ray.

Oddly enough everybody looked okay with the situation as it was. Buzz jr. and Delaine were happily married and Harper was extremely happy to be single and not ready to mingle. Also Riley's second half-brother was born during this period; Hayden Grunt.

Riley learned how to walk and talk by her mother, and surprisingly got potty trained by her father. Which is surprising as her parents were not living together.

Even though she saw her father often, she got closer to her mother. She got accepted to private school together with her cousin Sander and met her younger cousin Kenneth. She fellt uncomfortable with him as he often started crying when he would see her, so she started avoiding him.

Riley started to notice that she would see her father and brothers less and less. She became good friends with distant relatives Max and Mara though. Her cousin Kenneth started to get on her nerves, sho she learned anger management in order not to snap at some point. She choose the popularity aspiration in order to be able to get some more friends, or at least the need to. 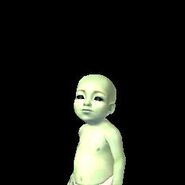 Riley as a baby. 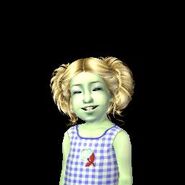 Riley as a toddler. 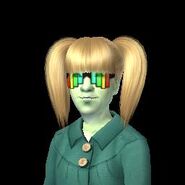 Riley as a child. 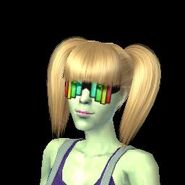 Riley as a teen.
Add an image to this gallery
Retrieved from "https://sims.fandom.com/wiki/Fanon:Riley_Curious?oldid=743061"
Community content is available under CC-BY-SA unless otherwise noted.