Peer Review Request
The author of this fanon article is requesting a Peer Review from the Fanon Peer Review Team (FPRT). FPRT members: Please read over this article and discuss it with other members of the team before issuing a rating. Please be sure to include written justifications for the rating you give it. When issuing a rating, change this template to: {{Peer review|<rating>|<reasons for rating>|<your signature>}}. 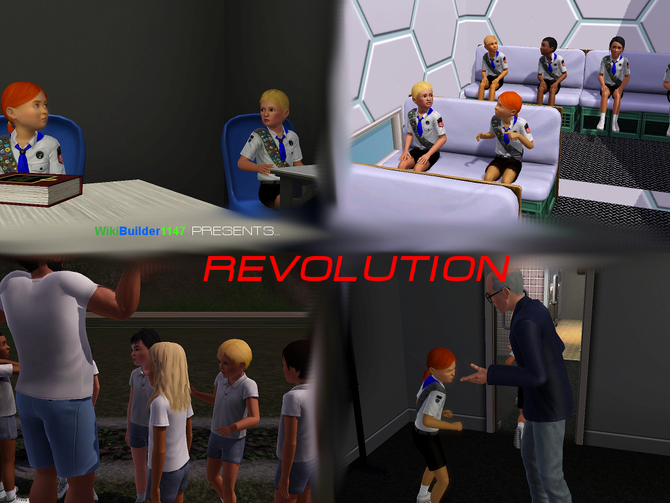 "You, Mr Rilkins, are a CRIMINAL!"

Revolution is a fanon series created by WikiBuilder1147. It focuses on the quest of a boy to rescue his best friend from the clutches of an all-powerful regime. It is also a possible origin story for Oasis Landing.

Step into the terrifying future...

Part III - And So it Begins[edit | edit source]

The following is an alphabetically ordered list of all pages relating to the background of the Revolution series, including pages on the Government, and the characters. Warning: Spoiler Alert!

I have a few questions for you to answer.

Last question: How do you think I could improve the series as a whole? Post in the comments!

If you said other in any of the polls, comment as well! Please keep your comments civil and make sure your criticism, if any, is constructive! Thank you! ―The Tim Man (Infinite Histories • Galactic Crucibles • The Sims Wiki • Hallows Maleficent • Why I'm here in the first place) 11:55, September 27, 2014 (UTC)

Retrieved from "https://sims.fandom.com/wiki/Fanon:Revolution?oldid=696352"
Community content is available under CC-BY-SA unless otherwise noted.