Renaud McGaw is a playable resident in my player stories in The Sims 2 in Strangetown. He is a member of the 'McGaw' manufactured Business group, alongside Victor Gonzaga, Rodney Carr and Phoenix Kalson. Renaud is voiced by David Boat and is 29 days from being an Elder. He is the second oldest member in the McGaw business group.

In my player stories I grouped four Adult Male Sims together to form a manufactured business group. They were Phoenix and Renaud (CAS Sims) and Victor and Rodney (two Sims generated by the game under my supervision). They moved to 57 Road to Nowhere and spent their first day getting to know each other. They soon realised that Renaud and Phoenix were very different from Victor and Rodney.

Renaud is considered to be an ambitious hard working Sim who doesn't have time for fun and games, as he is a Knowledge Sim who is focussed on his job in the Science Career. He has a good Relationship with his friend Phoenix Kalson, but unfortunately they do seem to be losing contact in favour of their careers. Renaud usually stands out as the intuitive leader. He is normally the one who is trying to get Victor to co-operate and not be so lazy. Renaud is relatively neat, outgoing and active, but he is very serious and somewhat grouchy. These are perfect explanations as to why Renaud's Personality clashes so much with Victor and Rodney's.

Despite the major differences between Renaud and Victor and Rodney, he appreciates having them as his co-workers and he is willing to use his knowledge to find solutions to get on with them better. Out of the four members of the business group, Renaud is the one who receives mainstream credit for being the smart one, the most influential one. It should be noted that had the four of them gone their separate ways, Renaud would almost certainly have the most success as a solo businessman. He has good relationships with Vidcund Curious, Lazlo Curious, Pascal Curious, Loki Beaker and Matthew Howe (who works in the Medical career). Eventually Renaud's role in the business group paid off and he reached the top of his career - becoming a Mad Scientist. 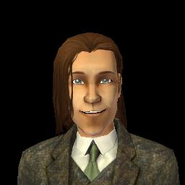 Renaud's acquaintance Matthew.
Add an image to this gallery

Retrieved from "https://sims.fandom.com/wiki/Fanon:Renaud_McGaw?oldid=818466"
Community content is available under CC-BY-SA unless otherwise noted.