Regan Capp is a major character in the PVCS vs STM Football screenshot story series.

In the 2015 Match, she was a midfielder for Team PVCS (PleasantView-Capp-Summerdream).

In the 2035 Match, Regan became the Veronaville PVCS Manager, alongside her Pleasantview counterpart, Daniel Pleasant.

Like her pre-made Veronaville counterpart, Regan Capp is married to Cornwall Capp at the start of the story (in 2015). However, Regan's role is significantly larger than Cornwall's, as she is born in the Capp family, and played for the full 90 minutes of the 2015 Match.

In 2035, Team Manager Regan also gets more attention in the story, than audience member Cornwall -- since Managers make decisions that directly influence their team's performance on the field.

In the two decades between the matches, Regan and Cornwall started their own business, and had a son named Octavius.

Octavius is a teen in 2035, and is a starting player for PVCS. How is their mother-son relationship like?

Regan's attitude towards her brother Kent Monty, the first of the Capp turncoats, is also a major theme in both the 2015 and 2035 Matches.

Does she perceive Kent in a different light from the rest of the Capps, and if so, why? Will her perceptions of Kent influence her role as the PVCS Manager?

All these factors made Regan the best choice to succeed her late father, Consort Capp, as the Veronaville PVCS Manager. 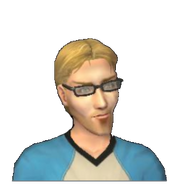 Her son, Octavius Capp
Add an image to this gallery

Retrieved from "https://sims.fandom.com/wiki/Fanon:Regan_Capp_(PVCS)?oldid=721363"
Community content is available under CC-BY-SA unless otherwise noted.