Regan Capp is a well known resident in my player stories in The Sims 2 in Veronaville. She is the daughter of Consort and the late Contessa Capp, the wife of Cornwall Capp, the younger sister of Goneril Capp, the older sister of Kent and the late Cordelia Capp, the mother of Antonia Capp, and the auntie of Juliette, Hermia, Tybalt, Hal Capulet, Desdemona, Miranda and Ariel Capp and Magnus and Stacey Monty. Regan is voiced by Zoe Galvez and is 26 days from being an Elder.

To many players it is clear that at the start of the game Regan and Cornwall were not in love, and according to their Memories, they never have been. Because of this, some players believe that their Marriage was probably arranged. Judging by Cornwall's pre-set biography and aspiration, he probably only married Regan for her financial status and her family's power and job. Their family description says that Regan and Cornwall are preoccupied with their careers, though it is obvious that they are both unemployed at the start of the game.

However their pre-written suggestions clearly contradict the events in my gameplay. Regan and her husband and her brother had just moved into a cheap house in Veronaville, I moved them into a more expensive house - 267 Avon Avenue - once I increased their economic status with Motherlode. Regan and Cornwall quickly added romance to their Relationship. Roughly two thirds of autonomous interactions they did were romantic. Obviously they didn't care that their marriage had gone off to a poor start, and they certainly didn't care for their pre-written back-stories. Turns out they wanted to be romantic for the sake of their marriage.

Soon Regan's sworn enemy Bianca Monty joined the family by marrying Regan's brother Kent. For some reason when Bianca joined the family, Cornwall's relationship flags to Bianca were unset and reset, so he no longer held a grudge against her. Regan began to terrorise her now sister in-law - only stopping her violent behaviour after Kent firmly stood up to her. Cornwall who had lost interest in the feud ages ago, in favour of earning Simoleons, was not interested in backing Regan up. In spite of everything Regan and Bianca had been through, they eventually became good friends. For the first time since playing the Sims 2, Cornwall's request for Sex was rejected by Regan but she later agreed.

Regan and Cornwall gave birth to a daughter - Antonia Capp. She is a Pleasure Sim who works in the Culinary Career. Later that same day Bianca and Kent gave birth to their child, another daughter - Stacey Monty. Regan had signed up for a job in the Business Career as Senior Manager, but she became employed in the Political career as a State Assemblyperson instead. Regan also became nominated as a candidate for head of Veronaville. When she heard that she wasn't going to get the job, Regan asked if she could become Goneril's deputy. Her request was approved. Regan is currently rising through the ranks to becoming a Mayor. 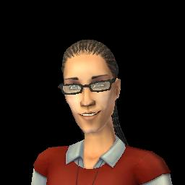 Regan's daughter Antonia.
Add an image to this gallery

Retrieved from "https://sims.fandom.com/wiki/Fanon:Regan_Capp_(C.Syde)?oldid=818485"
Community content is available under CC-BY-SA unless otherwise noted.