Ralph Simdow was created by Starmoonie. Ralph is the late husband of Janie Simdow and the father of Cubie. He enjoyed his life collecting artifacts from around the world but that ended in a house fire.

Ralph is kind of boring type of Sim. He really liked to read and never play outside, it was his thing and this often caused problems with his party loving wife. He was very good at consigning things and these objects he found were very rare. Ralph is quite mean for a big guy because he was often teased for his weight when he was young.

Ralph lived in three bedroom house with his wife and daughter in Riverview. He married her for love and he knew Janie had loved him too even for money. He was working in the business area as a Cooperate Drone but then one night the house caught on fire because of Janie. He grabbed Cubie and gave her to Janie and told them to run outside so he could put out the flames.

Doing so he caught on fire and was trapped in the smokey oven heated home. His wife and daughter looked on and hearing the screams of his pain made them ill to their stomach. Ralph soon became ashes and the Grim Reaper came for his soul. His tombstone is located in the back of the Saint house.

Ralph is still deceased in The Sims 2, so no story here. 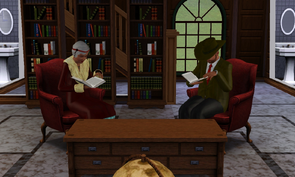 Ralph enjoys spending his Saturdays at the library.
Add an image to this gallery

Retrieved from "https://sims.fandom.com/wiki/Fanon:Ralph_Simdow?oldid=659238"
Community content is available under CC-BY-SA unless otherwise noted.