Fanon article ownership
This fanon page was created and is owned by Mr.Bodzio (talk). Unless the edit is constructive and/or minor (such as fixing a template), please do not edit this page unless given permission from the author.

Rahim Large-Ferguson was a son of Sunshine Ferguson and Grim Reaper, and Twin Brother of Jade Ferguson-Gannon, and half-brother to Franklin Ferguson and Betty Ferguson.

He was born in Sunset Valley. After his first birthday(from Baby to Toddler) he saw death of Ariane Murdock, who was shocked to death after repairing a broken TV. After his second birthday he sabotaged another TV, and Sunshine called for repairman, and he's got killed too. After his third birthday, he directed thunder to a sim and let him die.

When he grew up to Young Adult, he and his sister became immortal, like their mother, but they renounced to have normal life and family. 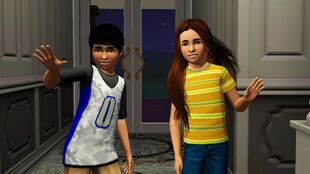 Rahim and his Twin Sister Jade as Children
Add an image to this gallery
Retrieved from "https://sims.fandom.com/wiki/Fanon:Rahim_Large-Ferguson?oldid=677119"
Community content is available under CC-BY-SA unless otherwise noted.