Quinn Space is the daughter of Kylie Space and Fricorith Space and the twin sister of Barney Space. She is known by most as the town casanova until she met Jacob. Jr. She was best friends with Debbie Gothier, the girl who her brother was married to before their untimely deaths.

As a baby, Quinn had a great life. She was adored by her parents and grandparents, not to mention aunts and uncles. Nobody seemed to notice her unusual skin tone.

Not much happened in her childhood except that she met Debbie, daughter of Frances and Cara. They became best friends along with her brother. Also her aunt graduated form college and got married.

As a teen, Quinn chose romance aspiration unlike her brother who chose popularity. Despite this she and her brother remained friends. One night, Quinn's friend, Natasha invited her out to a club at night. Quinn snuck out and was amazed at what she saw. From then on, every night she'd sneak in and out of the club and met loads of boys along the way. None, of them ever became official couples though. One night, she was in the club and she spotted a boy who wasn't smiling but looked sad instead. She went up to him and asked him what was wrong. He explained that his mum had just died so she decided to befriend him. Over the next few months, she and Jacob. Jr hung out a lot. Slowly she began to realize that she had feelings for him but she hid them as she didn't want to fall in love. But then one day, Jacob. Jr admitted he liked her,a lot. She couldn't hide her feelings anymore and she suggested they go steady and see where it led them. Quinn was very sad when her grandpa died as they had been close but when her grandma died, Allen and Nancy had to come and stay with them. Allen was sweet as he was young and he was never in but Nancy was just a pain. Quinn didn't like Nancy as she was a few years older and thought that she was boss. One day, Quinn and Nancy had a huge fight and which ended with Nancy running away... Luckily Nancy came back and nobody found out Quinn's part in her running away. Nancy also decided to go to College to be a lawyer which got Quinn thinking about a future at college. Barney seemed into the idea and so did Natasha, Tina and Jacob. Jr. She soon found out that her cousin Jeanie would move in until her aunts murder had cleared up a bit so the house would be cramped so Quinn, Barney and her friends moved to Sim State University.

As a young adult, Quinn decided to study art. She was happy because Debbie had come to college too but in a different house. One day, Jacob. Jr took Quinn out on a date and he proposed! Quinn was ecstatic and immediately agreed. However, Quinn and Jacob. Jr went a little far, and Quinn got pregnant, however they believed they could handle it and they moved out of the dorm to start a family in a College neighborhood. Life was good for Quinn. She graduated with Cumme Laude and left college with a degree in Biology.

As an adult, Quinn married Jacob. Jr at Villa de Sol. Quinn was worried about Barney, he was still moping over Debbie. As if by magic, she got a phone call. It was Debbie ringing to say that she was back in town for a few days before her wedding to Eric and she was wondering if she could stay with Quinn as her parents home brought back... sad memories. Quinn agreed although Jacob. Jr was angry as Debbie had betrayed Barney and she was staying with him but Quinn was adamant. Jacob. Jr agreed but didn't say anything to her when she came except for a cold hello. Quinn rung up her twin telling him not to go out as it was... rainy. Quinn thought he would listen to her but she was wrong... Quinn later got pregnant again and they found out it was ANOTHER girl. They decided to call her Suki even though she was unborn. Quinn soon became worried about her friend when Debbie cancelled the wedding after she was discharged form hospital. Even more worryingly, Debbie left to Three Lakes and Quinn could tell that it was all connected to Barney but when she rung him to ask, but he said it was none of her business. However things began to look up as Debbie had returned and Barney and Debbie were engaged and Debbie was pregnant! However, she soon found that Debbie was dying and her time was limited. Quinn visited them loads to see her niece, brother and best friend as they may not have much time left. After a few years, Debbie's illness finally got the better of Debbie and she died. Quinn was devastated but even worse. Barney died too... Quinn felt like half of her was missing, her twin was dead. Then her Dad died too. Quinn spiralled into a depression but she was brought out of it about by the fact she was going to have a son! They decided to call it John as nobody in the family had had that name before. John was born but then tragedy struck (again). Kylie had died. Quinn was devastated and wanted a fresh start so she and Jacob. Jr agreed to move to a new place. They were sad to leave the Kierra District but Quinn had found the perfect place in Snowdon Peaks. Everyone was thrilled except for Lana... Quinn loved after life loads after that. Her kids were happy, Jacob. Jr had a great new job and life was great. She had a great new social life and didn't notice that anything could possibly be wrong. But it was... 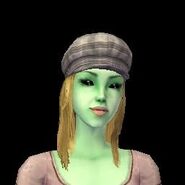 Quinn Space as a Teen. 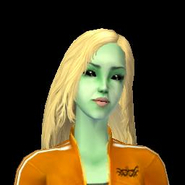 Quinn Space as a Young Adult. 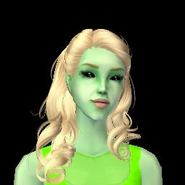 Quinn Space as an Adult.
Add an image to this gallery
Retrieved from "https://sims.fandom.com/wiki/Fanon:Quinn_Space?oldid=673800"
Community content is available under CC-BY-SA unless otherwise noted.